Vrooooooommm….vrooooommmmm ….vroooommm……sounds familiar? well most will automatically connect it to fast cars, speed, race and yeah the ultimate one will be F1. So what I get to do with it this time? Nothing much (yeah right), just that I just got a chance to meet one of the legendary F1 driver, the cool, macho, composed Mr David Coulthard!! Even though it was a short meet and greet but when else I'll be giving this opportunity. Supposed to be a line but it went a little chaotic as everyone want to have photo with  him  So thank you REDBULL and Microsoft Hotmail.Thumbs up! Somebody please pinch me! 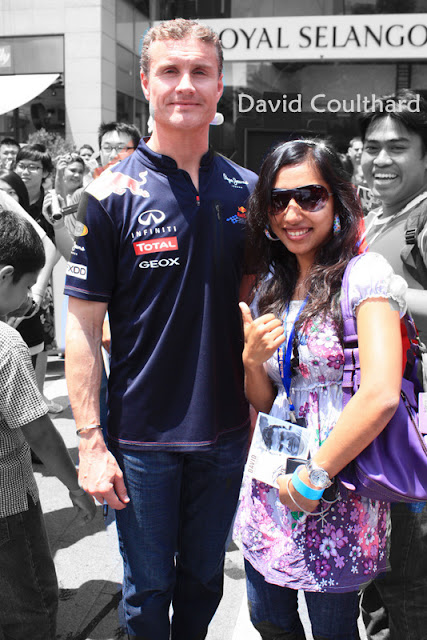 So who is David Coulthard? As taken from Wikipedia- Coulthard, made his Formula One debut in 1994 and won 13 Grands Prix in a career spanning 15 seasons. Twice a winner in Monaco, Coulthard was team-mate to Mika Häkkinen in the Finn's two Drivers' Championship winning seasons for McLaren Mercedes before helping establish the Red Bull team. Coulthard amassed a notable points haul placing him eighth on the all-time scorers list. His best Drivers' Championship finish was second in 2001.Coulthard is now a BBC F1 TV commentator and pundit while also being a team consultant for Red Bull Racing and Toro Rosso. Now that's was pretty mouthful.
It was in conjunction with the Red Bull Speed Street held at Malaysia yesterday along the stretch road of Bukit Bintang. Yup the road was closed for the first time where Ryan & Jin of Hitz.Fm kept us company with their wits and jokes. Ryan was such a sport that he even rolled himself from one corner (Starhill) to the other (Pavillion) on that empty street.
I won the tickets from HERE and you could still score some sets of Autographed RED BULL  TEAM merchandize by 20 April 2011. So thank you HOTMAIL for choosing me! 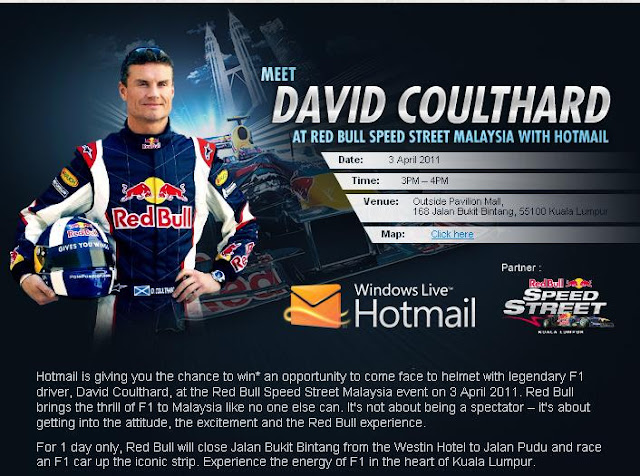 The exhilarating event simply blow our eardrums for more with the super thunder-like sound of the race car's engine. And each time it passed through the 'grand stand' it was like massive cheering from the crowd.I think I just got diagnosed with the F1 fever...officially.
Orait back to the event, we were informed to meet at Royal Selangor, Pavillion at 1.30pm. There we were given the tag for VIP entry to meet the man himself and also to witness the Speed Street at the 'Grand stand' provided. Ms Joanne and Ms Lavinnia, the helpful P-I-C were always there to assist 20 of us. With energy  booster drink, mr REDBULL itself penetrating into our blood, we were pretty hyped up for the event. 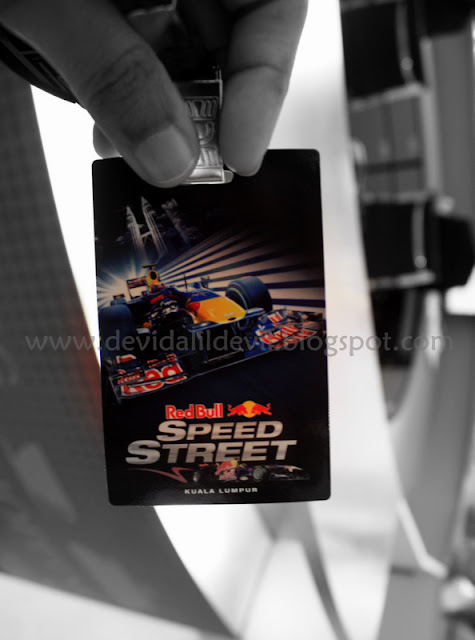 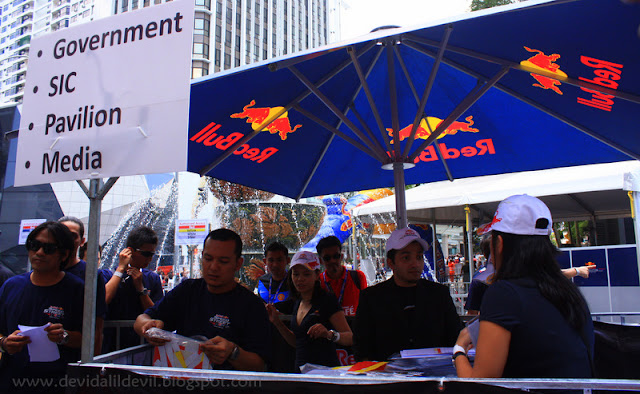 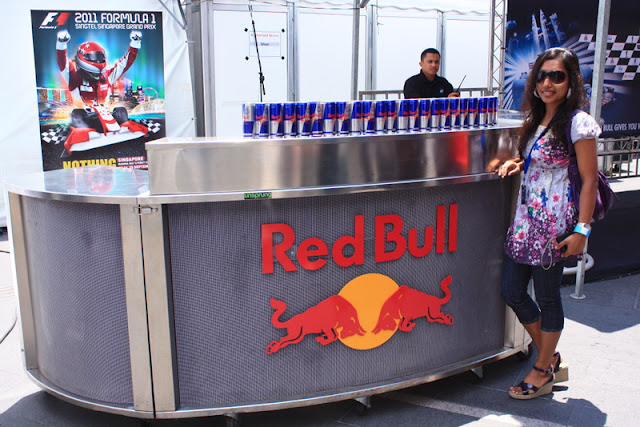 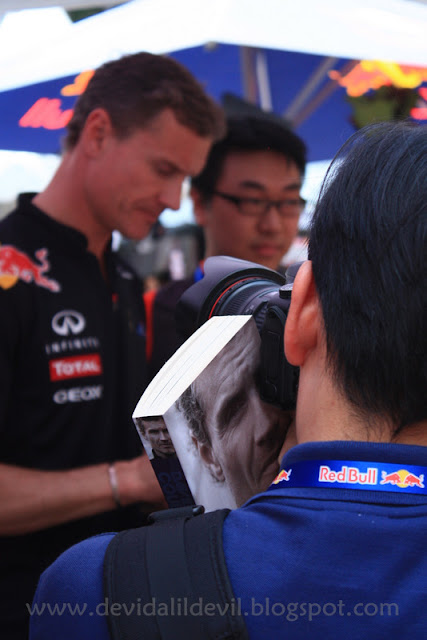 After some really cool speed 'tour', our very own 1st Malaysian F1 driver, Mr Alex Yoong makes his sway appearance in a Audi, showing off his skills with his AWESOME burnout signature on the road. Everyone was like WOW! even those construction workers taking a break from their tedious work to witness it. That was most probably the most mind blowing appearance i've ever seen. :) 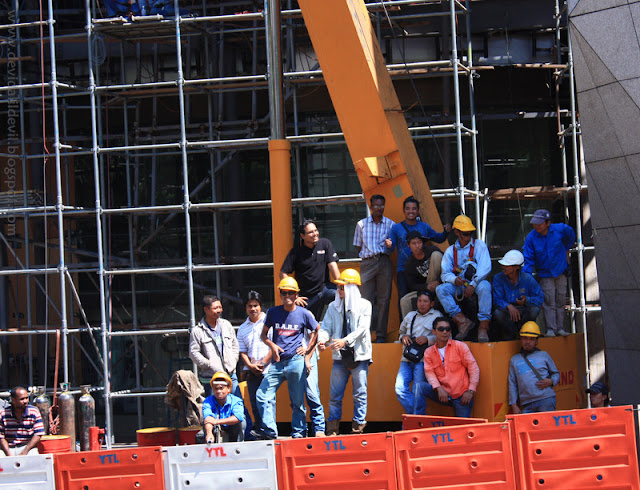 Even the 1 hour scotching hot sun couldn't dampen our spirit, we were charged up after that as David Coulthard did another round followed by Alex Yoong and the whole street now smoked with contentment. Cool burnout & certainly smoking HOT! 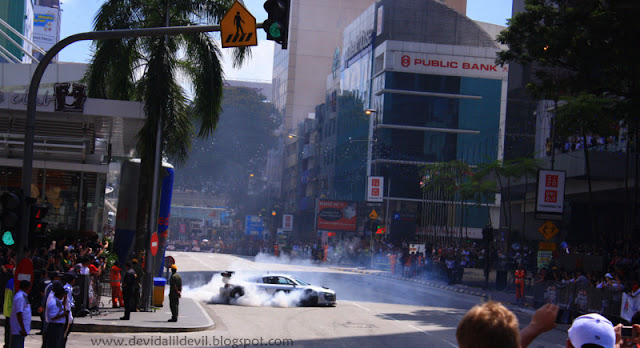 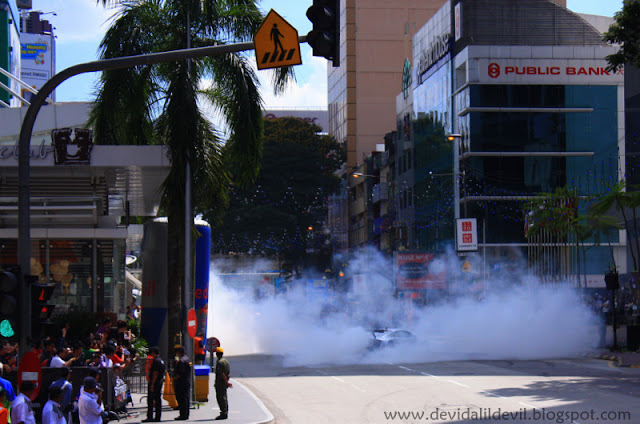 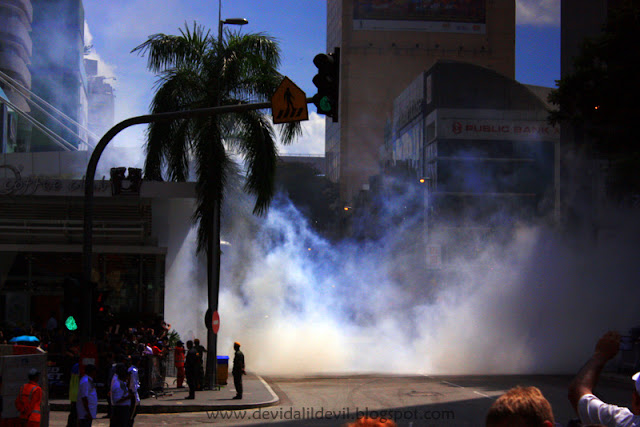 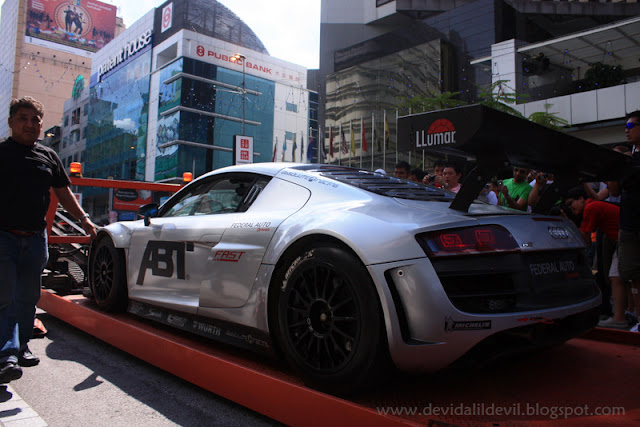 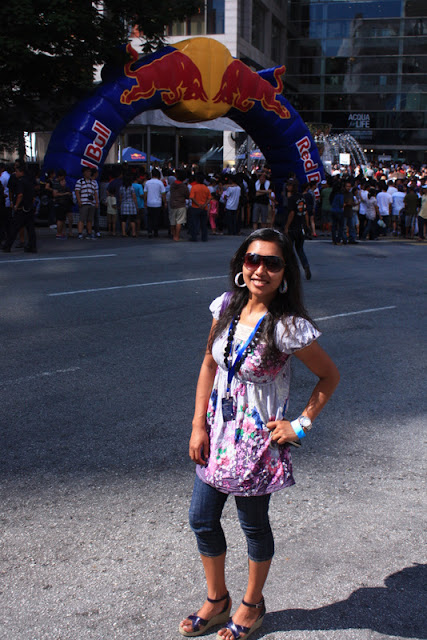 So here you go a short clip of the speed street by David Coulthard.
Thank you once again REDBULL and Microsoft HOTMAIL for the fiesty awesome thrill on a Sunday afternoon. :) Hope there will be more event like this lining up soon. :) so keep those 'fever' rising higher..Thanks to MSN Sports too for selecting one of my questions during their interview with David and you may check it out HERE
Go figure by Devi da Lil' DeviL at Monday, April 04, 2011

What did you all do after the event when you're back in Pavilion? I lost track of the group. :P

BTW, i was the person holding the book which u took a pic of. :)

as mentioned in my blog - hehehe..Mr Anand (the MD of Microsoft) chat with us for a while before dismiss. then its on our own. So i quickly when and search for Alex Yoong. :P

Ahhhhhhhh so that's where everyone disappeared to after the event LOL It was definitely an awesome day out and meeting Coulthard was icing on the cake.