The season might be over but the fame has just begun. Yup..as all of us know the winner was finally announced in the much anticipated reality show and I was one of the lucky people that managed to attend the Asia's Next Top Model Finale Party on 15 February 2013 held at Stage 28, Universal Studios Singapore! It was night full of gorgeous models, glitz, glamour and yes you got it right ..Gold like the royalty only my duke was no where to be seen.  Thanks to Playboy Fragrance as they picked my entry and there I was with my mum experiencing like a true VIP diva. From being chauffeur from my HOME in KL to KLIA and upon touchdown Singapore Airport another driver pick us up to our hotel which was the luxury Marriot Hotel. woots! 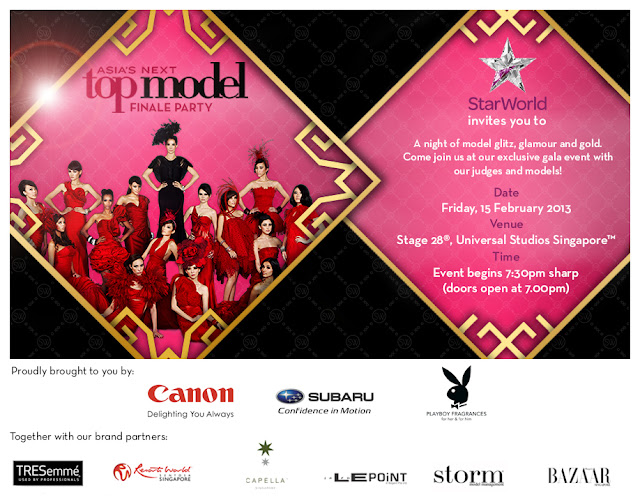 Orait here's the deal, some of you might be asking how do I received the invitation right? Well...it was from a  slogan contest I've joined early this year. The prizes was simply hard to resist! There are :

A pair of VIP passes to catch Asia's Next Top Model Finale Party. 2 return air tickets (KL-Singapore-KL), 3D2N stay for two at Resorts World Sentosa Singapore (or similar-I got to stay at Marriot which was even better! hehe) , a pair of passes to Universal Studios Singapore + half-day sightseeing tour! On top of that, USD400 cash!!! and a VIP dinner for two at an acclaimed restaurant. Sounds unbelievable right? Last but not least, they will also provide a makeover for two to attend the Asia's Next Top Model Finale Party!

Wow that's was mouthful and it was one of the key point why I quickly when to the nearest Guardian and get myself a perfume (by the way their fragrances are nice as they are not too strong for my liking) worth RM35 and start cracking my brain for a slogan. Lucky strike when I finally received a call from this friendly lady, Ms Evonne Tan that I've won!!

So finally the day arrived (just 1 day after coming back from Cameron for a CNY family trip), our Airport Limo arrived earlier than scheduled. Pretty excited! Reached KLIA and met with the representative from StarAsia (M) Sdn Bhd, the friendly Evonne  Tan and Ken Liew. Thank you for your hospitality and ensure our stay and trip are in order plus helping me snapping some photos with the models during that finale party. Hrrmm..maybe it's about time for me to 'win' a new camera..LOL

Okay I will separate my DAY 1 blog in another post, this post will be mainly on the ANTM Finale Party. It was Day 2 about 3pm (after spending half day at Universal Studis Singapore), after freshen up, we went to the designated room in one of the floor at Marriot for our makeover. Hair and make up was done and finally we are ready  for tonite event!

Singaporen rep from STarAsia are Suzie Ragavan and opps i forgot her name..sorry :( was there to assist us on transportation and logistic to the party. Traffic was pretty bad on a Friday evening (after working hours plus it was raining) However the rain stopped once we reached Resort World Singapore.


The event kicked off with a runway show by the models from Asia's Next Top Model clad with their gorgeous Armani Xchange outfit. Lion dance was also performed during that night much to our amusement. The host was this dapper looking gentleman below, Mr Bobby Tonelli (Thank you Rachel Erasmus that tweeted me his name earlier)
Then came Nadya Hutagalung, the beauty that also being one of the judges for Asia's Next Top Model Season 1 to announce the winner. It was quite the obvious the competition between the 3 finalists, Jessica Amornkuldilok, Kate Ma and Stephanie Retuya was simply undeniable. I've been rooting Jessica since the final last 4 episodes with her poise, determination and consistency. however Kate Ma is one bubbly girl that simply exude the epitome of model with adventurous appetite. Her large personality simply caught my attention! hahaha However sadly she was not able to attend the gala night due to family issue.

Finally the winner was revealed and it was none other than Jessica!! congrats girl. enjoy your new ride and new chapter of life! Bursting of confetti and applause penetrating the hall while all invited guests proceed to mingle around. Met some of the winners from Singapore, Vietnam, Philippines, Taiwan and Indonesia. Cocktail, delicious food, gorgeous people with of course how can I forget, the lovely fragrance of PLAYBOY ignite that lovely evening. Like a scene from a movie and remind me of the party in New York, loving every moment of the limelight here..hehehe

Then the models came and joined us for a night filled of laughter, chit chatting and roll like a DIVA! But every finalists of the Asia's Next Top Model have their own unique qualities, which was a balance of all the drama they portrayed in each of the episodes.

Thank you PLAYBOY FRAGRANCE for making my dream come true like a true VVIP! Come and add/like PLAYBOY Fragrance FACEBOOK now and who knows you might be the next lucky one! Just PRESS TO PLAY!
Go figure by Devi da Lil' DeviL at Tuesday, March 26, 2013