Who will have thought saying YES for a last minute call from Tune Insurance last Wednesday was my first attempt of being the champion at the Go kart track Sepang under Tunetastic race that 21 March 2013! 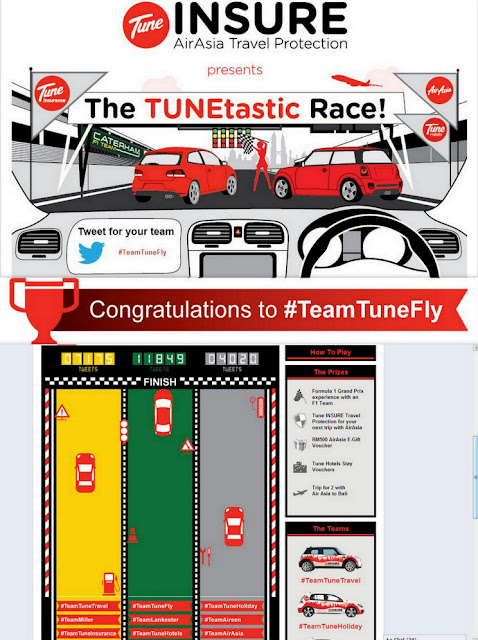 The crazy thing about life is when if it is meant for u, then it will no matter what happen. Coz actually to be in the Tunetastic race, one need to be first a hardcore twitter whereby the team they are rooting for is also the most tweeted team that finished the 'online race'. The 3 teams are TeamTune Travel/Peter Miller,CEO of Tune Insurance, TeamTuneFly/Mark Lankester, CEO of Tune Hotels, and TeamTune Holiday/Aireen Omar,CEO of AirAsia. Held from 26 Feb 2013-15 March 2013, it was a craze trending virtually.
Then 6 finalists from the most tweeted winning team will compete for a Formula 1 Grand Prix experience Go-Kart Showdown race at Sepang International Circuit. TeamTuneFly took the lead so all 6 finalists are chosen from that team. yeay yeay!
Actually I was not even the first next finalist, apparently 2 contestants pulled out due to unforeseen circumstances so there's where my name appeared on the next line. Prizes will be forfeited should any of the finalists are not able to make it during the race. So when I received the call while I was in the midst of conducting a training, I quickly jumped in stating that I will attend. Only to realize that I have meetings to attend that day, GULP!

But opportunity like this don't come often, so come Thurday, I went for the 1st meeting that morning but excuse myself for the afternoon one and off to Tune Hotel, Kota Damansara!. yeah like premium rush (minus the bike), changed to sports attire and waiting for the Tune Troopers to chauffeur us to Sepang International Circuit (SIC) for the ultimate Tunetastic showdown..woots! excited wei! So while waiting, I checked in first the room they provided for 3D2N in conjunction with the F1 Sepang 2013.  Clean room and they also provided the air-cond, tv and towels..yeay!
The Tune Troopers and other finalists, Annabelle, Basil, Hsiao Wei were already there. Yee Pee and Kenlli Lim will meet us there straight. Finally at about 1.45pm, the person in charge from an event company, Isabelle came for a short briefing before all of us head to Sepang. It was certainly nice to have a personal driver! Thank you Tune Insurance! how thoughtful.
Upon arrival, we were welcomed by this awesome lady, Mawarni Adam McCalman (Head of Marketing of Tune Insurance). All 6 finalists are ready but just as the race about to start, guess what stopped us?? mother nature..yup it rains so heavily that we have to delay the race for almost an hour later. But with the heat fueling the Go-Kart track, at least the rain sort of cools us down. We started with a practice session. Followed by Qualifying round for TOP 10 before the final actual race.
I had so much fun racing that I almost forgot about the danger of not controlling the steering with full grip. But best part of the race was certainly the mud splash on me as I drove closely upon approaching every corner of the track. Not to mention the 180 spins..freaking awesome stunts with adrenaline pumping moment..ahahaha..first time go-karting in Sepang and I will definitely come again!

I hope they will upload the video footage soon, I wanna keep a copy for myself..Speedy gonzales!! hehe First qualifying round, I got 4th placing. That means I managed to proceed to the final. Had a short break and surprise! surprise! The Head of Events & Hospitality of Caterham F1 Team, Cyril Francis showed up with 2 of the their F1 Drivers, Giedo van der Garde & Alexander Rossi (reserve driver)!!! They shared some tips, chatted a bit and group photo session. It was short but certainly inspirational. Giedo started go karting when he was 9. A year later, he was the champion for various championship track. Brilliant. Here wishing Giedo, all the best for the race this 24th March!
So soon after that the final race started and that is also where I started to feel nervous..But this time I just want to finish the round as soon as possible! So I was pressing the pedal on full force except for each corner where I played with the brakes. After few laps of gripping those steering and burst of  high speed strong wind, finally I managed to finish the race safe and sound.
We actually compete with the representative from Tune Hotels, Tune Groups, Tune Insurance, BIG, AirAsia, Hitz Fm Cruisers & bloggers as well. This is to hype up the competition. But only finalist will win the prizes.
So the result..jeng jeng jeng...from the scoreboard, my name was there as the champion among the finalist! So happy!!!


Thank you very much Tune Insurance, Air Asia & Tune Hotels for organizing this Tunetastic race. The prizes that I won beside the cool trophy (how often do we get trophy nowadays, right??) are Bali trip with Air Asia and travel protection by Tune Insurance, 3D2N stay at selected Tune Hotels, Formula 1 Grand Prix experience with an F1 team, Meet the Drivers and Garage Tour, Formula  Main Grandstand F tickets for 2 for the 3 days Formula 1 race plus after race concert access, Complimentary stay at Tune Hotels from 21-24 march 2013, complimentary transportation by Tune Troopers from 21-14 march 2013 from hotel to SIC, AirAsia e-Gift vouchers worth RM500 & merchandize from Catherham!. wow..that probably the longest list of items that I've won for 1 contest. All other finalists didn't go home empty handed, they won Langkawi trip, Caterham merchandize, 3D2N stay at selected Hotel Stays as well, F1 Hillstand tix and AirAsia -e-gift worth RM100. I know the prizes I've won was awesomely great but the experience was even greater! Here to another weekend filled with awesomeness!

*Thanks to Aston and Tune INsurance for some of the photos!
so enjoy the video below from Tune Insurance
Go figure by Devi da Lil' DeviL at Sunday, March 24, 2013