The Color Run - happiest 5K on the planet!

Last Sunday was definitely one of the best day that will be fondly remembered in my life. I came across about the Color Run dubbed the happiest 5K on the planet (I couldn't agree for more) through CIMB facebook as they were one of the co-sponsored for the event. Synonym with its name, The Color Run is basically no-rules 5km marathon that create the idea of wearing white at the starting line and finish plastered in colors!! Almost like HOLI festival except for crazy dance and rave after party effect. Anyway since I'm always game for unique and motivating theme like this, I've joined one of the simplest contest in their facebook page to score 2 free passes worth RM150 for it. I've collected my race pack a week earlier and it has been quite some time I feel this excited for something upcoming. Yeah i miss those feeling but fret not my mojo is back haha..time to heighten new discoveries. 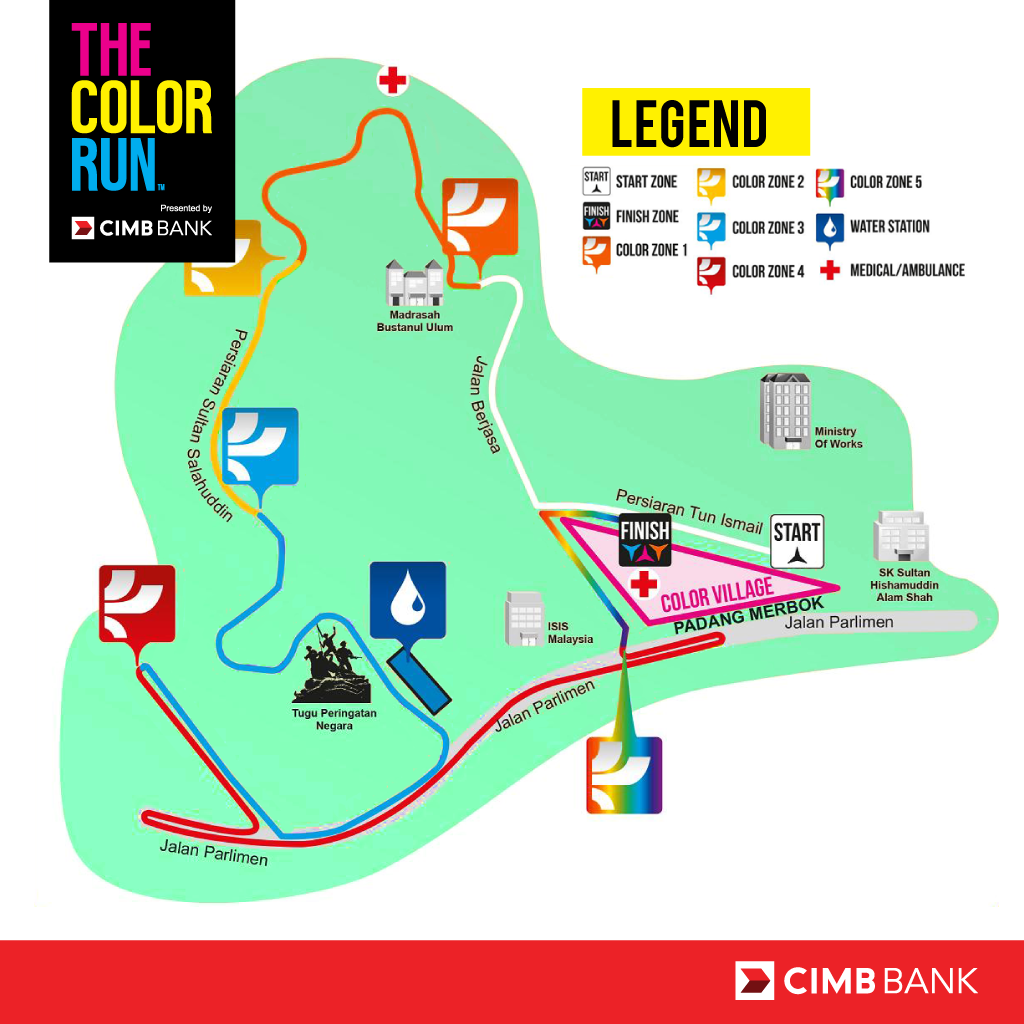 Founded in January 2012, The Color Run engaged to promote healthiness and happiness by bringing people from all walks of life together to participate in the "Happiest 5K on the Planet". Single largest event series in the United States, it has exploded in 30+ countries with hosting more than 170 events in 2013.
Honestly speaking, my first marathon run was when I was in primary 4/5 and it was not that fun. I normally run on treadmills nowadays to keep myself healthy and stay in shape. This Color Run however entice me probably due to its fun character and the anticipation was pretty hype up.

I was so semangat that i woke up at 5am even though I slept at 1am that day. My sis supposed to join me but she was too tired, so I went alone. Padang Merbok was still dark when i arrived at 6am, while I could see so many Color Runners already filled that area. My spirit and mood was definitely high in excitement. After warming up session, the runners were released batch by batch as there were thousand of us. Some clad with their cute tutu, knee length striped socks, headgears, colorful wigs and even sarongs! ahaaa. It was massive energy of good vibes I must add. Mixfm DJ Linora was hosting the event with awesome catchy dance music that definitely will keep your heart racing and pumping for a good entertainment.
So since this is my first color run, I didn't know what to expect but equally excited as well. I was walking towards all the booth from TNT to Toyota and CIMB to check out what's happening. There were photobooth and some free insta polaroid-like photos to be taken home for free as long as you upload your photos and #hashtag the write words. Most of the photos are taken from my Nexus 4 smartphone.

There were also the trampoline jump shot but the queue was too long, so I've decided to come back later after the run.
I dropped my bag at the BAG DROP counter, with my BIP number 01403 tagged with it to claim later after the run. As I was walking to the starting line entrance, guess who I bump into? Hans Isaac..hehe..then I also met nabila Huda, harith Iskandar and Joanne Yew of (The Journey's fame) from afar. Some of my friends were there but I could only bump into Kanmani and new friend, Irene. well check it out the fun through some pictures below, millions of vivid color combinations for sure! haha
The line was so massive that all of us have to wait for our turn to reach the starting line where Linora and other volunteers was up on a pillar throwing colorful powder on us..Every 1KM would be different stop of massive color blasting. Our first stop was TNT pit stop. We were ORANGED..hahah and we continue our walk among all these happy runners. if you are having a bad day, the energy here will definitely keeps you happy and smiling from ear to ear. We were like bunch of kids that don't mind being thrown with color powders (made of corn and its safe not curry powders okay) unto us..infact i was willingly standing in the middle instead of avoiding the chase. That's the whole point of coming here in the first place anyway.
We photoboomed, join the fun, dance, jump and laugh out loud. Thousand of participants are doused from head to toe in different colors at each kilometre. The most havoc was at the CIMB stop..pitch RED with their volunteers so enthusiastic throwing colored powder on us like it was a competition. The atmosphere was surreal and it definitely create happiness and lasting memories for all of us.
I had so much fun at the Color Run..really, simply cant wait for 2015! It was greatly organized, everyone is having good times there, from kids to adults. How often do you get this vibe nowadays? People are saying HI to each other, smiling and joining the fun as if we are one big family.
Last but not least, my mission to have the trampoline jump shot before i go home. So i waited in line for the final shot which was taken by the CIMB 's official photographer. orait done, went back home covered myself with ponco (also distributed by CIMB 's volunteers) so that our cars are not plastered in colors..haha..and bringing back memories of a lifetime. Thank you CIMB! check out the video below, time for me to get a GoPro..hehe
Go figure by Devi da Lil' DeviL at Wednesday, August 20, 2014