Thanks to Uniqlo for organizing this hip and cool UT pop up camera booth at their Fahrenheit 88 outlet this morning (15 June 2013).
This is in conjunction with the contest held recently via Uniqlo Facebook.

Well, i was not the 2 lucky fans selected, but i was one out of 10 other lucky consolation winners who was not only given a chance to have 1 on 1 with Uniqlo Malaysia ambassador, Nora Danish to be in the hall of fame at their website but also one complimentary UT shirt of my choice. Since i'm a Disney fan, so I choose this Disney yellow mustard collection that I am wearing in the video clip below:
Creating the video was so much fun especially with the sweet, gorgeous and sporting Nora Danish. I still cant believe she is already a mum! Anyway thanks once again to Uniqlo and their friendly staff Nicholas, Noelle and the rest that has been such a sport.
The video has been uploaded at this LINK- (http://ut.uniqlo.com/l/UWsCaA3d/)

For all of you out there who want to be in the UT 2013 pop up please head to Uniqlo Fahrenheit 88 and try out for yourself. Be wacky, be crazy and have fun!
Goodies that I get to bring home. Loving it! Hrrmm...its like a sign..London calling perhaps? hehee

With all the hype on Mencari Ramli 2 as I've blogged about earlier HERE , its time to cast your vote for your favorite RAMLI! Mencari Ramli 2 show will be broadcasted weekly on TV3 from 19 April 2013 onwards every Friday at 730pm to 8.00pm with 12 episodes in total.


All 39 candidates has shown their enthusiasm, perseverance, skills and this is time for your viewers out there to start voting from 14 June 2013 onwards.

How to vote..well simple as ABC..you can even multitask while texting like how I did..


oh well i voted after the 'training' above okAY..hehe


Vote wisely friends! ensure you vote for the candidate that fit to be the next RAMLI! Head to their website at http://www.tm.com.my/teammalaysia/mr2/Pages/home.aspx to check out profile of 39 RAMLI in the making 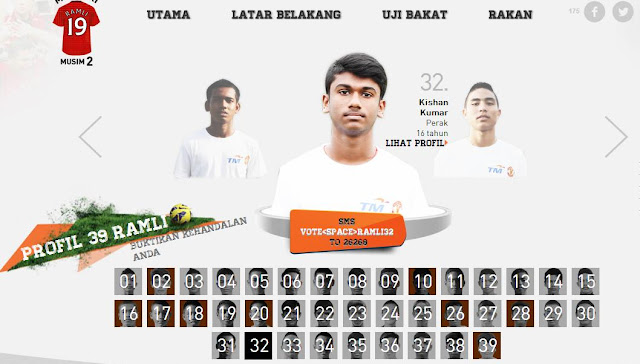 So how to vote?? check this instructions below:

And guess what, if you are the highest voter, you stand a chance to win the following as well :


The Grand Prize winner from this voting contest will earn themselves an all expenses paid trip to watch Manchester United play a match at one of the following locations :
(Bangkok, Sydney/Yokohama/Osaka/Hong Kong) 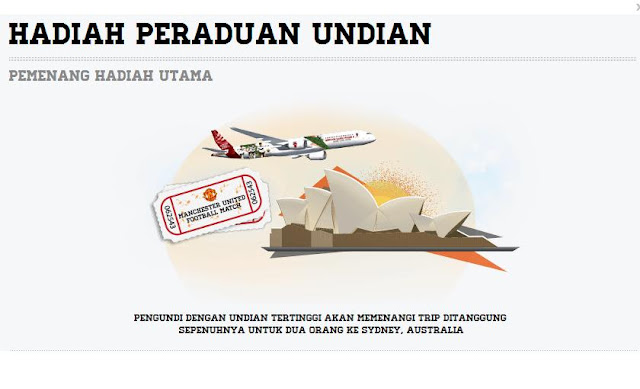 For more info on Mencari Ramli 2, you may check out the following channels:
Website : http://www.tm.com.my/teammalaysia/MR2
Facebook : https://fb.com/TeamMalaysia

Orait if you are a HUGE football fan then you probably already half way through the answers. However for those who are not but since your curiosity level has rose up so high, then read further.

1) WHAT is Mencari Ramli 2 about?
It's the latest campaign by TM following the success of Mencari Ramli 1st Season where the quest to search for the country's most promising football talent.
The 1st season of Mencari Ramli in 2012 saw 30 young talented footballers from Bukit Jalil Sport School tried to showcase their passion and talent where ultimately only 2 winners were chosen. One were drafted into the Harimau Muda Under-21 team while another finalist landing a stint as a striker in the U.S Arezzo football club Under-17 team in Italy. oh my..what a great once on lifetime opportunity man!
Mencari Ramli 2 is a docu-reality series that is looking for Malaysia's Best Footballer under 16, where they will be sent to Manchester United Soccer School to be trained and groomed to become "Ramli" (who else?) and becoming the next Malaysian football talent. This is a continuous effort in searching talent via series of events at 12 locations across Malaysia. The main objective is to provide a platform for young footballers to realize their football dreams. It is also a campaign to encourage Team Malaysia spirit through this reality show. Expect no drama, as this is serious business and help to raise the standards of our young local football talents. On top of all that, it is also to get parents to discover the potential in their own children and provide a solid support system. The show started on 19 April 2013,Friday at TV3 from 7.30pm-8.00pm. Again, top 30 talents will be selected for the finals, where 2 winners will be chosen by the judges and one through public voting. All in the quest to win the trip to the Manchester United Soccer School and also not forgetting the legendary Old Trafford with a 3 years scholarship to attend Frenz United Football Academy.

2) WHO is Ramli 2?
Aaahhhaaaa...Ramli is a Malaysian boy below the age of 16 with an extremely skillful talent at playing football. Beside that he is also a team player that committed and have great passion for football. Basically Ramli could be the best goal keeper, defender, midfielder or even the best striker. But most importantly the most talented player. I think RAMLI 2 going to be this cute small built boy but with the biggest dream to the hall of fame.

Haih..Honestly, I was so excited and my enthusiasm level was higher than the tallest mountain about going for the audition until when they decided to search for a boy instead of a girl. So to soothe my disappointment, I decide to show them what I got. Check out the video below:

Unfortunately my application was rejected but I bet you didn't expect that right? hehehe. Anyway moving forward..

3) WHERE is Ramli 2?
The location for auditions are stated as below :

4) WHY Ramli 2?
Because they want to create more RAMLI. its like our RAMLY burger with local touch that after sought even after all the fastfood chain mushrooming  c'mon we still crave for that particular Ramly burger coz at the end of the day, its still taste the best with a twist, right? And they need someone to accompany this winners from Season 1.

5) HOW to be Ramli 2?
Do you have the burning passion towards football? Is your motto in life are eat, sleep and play football? If you could dribble, juggle,  banana kick, scoring the most sway goals, sombrero, step overs or even spinning the football, then I suggest you or someone you know to attend the audition to be the next RAMLI.

I am not only a football fan (particularly  Manchester United) that burn the midnight oil to watch their matches in the wee hours but I consider myself as a self-taught Manchester United football players wannabe. Old Trafford certainly has been in my bucket list so I would like to think that this blogpost is certainly the stairway for me to score a trip to OLD TRAFFORD nevertheless! If only i fit the criteria of a RAMLI, i definitely would have go for the auditions..heeheee
For more info on Mencari Ramli 2, you may check out the following channels:
Website : http://www.tm.com.my/teammalaysia/MR2
Facebook : https://fb.com/TeamMalaysia
Twitter : @TeamMsia

Who knows they might be some great announcement to all of you out there. Do check out ya coz later dont come running to me asking why I didnt tell ya!
Go figure by Devi da Lil' DeviL at Friday, June 14, 2013 No comments:

Did the title above just increase your enthusiasm? well..read further, you might just win yourself cash RM10,000 or other exciting prizes..click THIS LINK  guys!!

Got a house for sale or property to buy? Visit www.iproperty.com.my

The winner will walkaway with RM10,000 to fund their own happily ever after home. Not only that, 10 APPLE TVs are also available to be grabbed. This Happily Ever After campaign is open to all Malaysian above the age of 18. Please submit your entries by 21 June 2013 (before 12 a.m.) and winners will be shortlisted based on number of likes. 20 contestants with the most likes will be selected based on the creativity of their story created.

And all fairy tales will ends as happily ever after. This is also my chance to pursue my next property! Bring it on!

Hello there! its already June of 2013! time certainly flies so fast when you are having great time. here to more of great time. let's make this JUMBO JUNE a memorable one..till then good night and Live Life Interestingly!
Go figure by Devi da Lil' DeviL at Monday, June 03, 2013 No comments: