Yo yo..just few months ago, I was chosen as the Grand Prize winner under the Blackberry Empowering Ambitions campaign. And with that, I had an opportunity to meet with their brand ambassador like fashion icon- Nurita Harith, notable chef-Sufiz, fashion blogger-Hanie and web content developer - Raeesa. It was a fun shooting and i've learn a lot from there. It was a rewarding journey and I'm glad to be given this opportunity.

So after 2 full days of actions, cuts and camera rolling, the video is finally out ..Check it out ! :)


I would like to thank Blackberry for trusting in me and picking me as the Grand prize winner. Not forgetting Text100 staff, crew and production of Phuture Phlow. It was fun and at the same time learning something out from my comfort zone. :) Simply cant wait what's next in line for me from Blackberry for being part of the Elite team. Dare to Dream!
Go figure by Devi da Lil' DeviL at Wednesday, January 29, 2014 No comments:

Ready for some celebrity crush? Well I was certainly outrageously ready. Despite to having a stand of not visiting any MADAME TUSSAUDS at every countries I've visited as I still prefer to rub shoulders with the real deal, but since it was FOC with 48 hours/2 days hop-on hop-off bus tour so why not? By the way, it cost $59 dollar per person which was also given complimentary if you book online from this website HERE. Print it out and bring along the voucher. Weather was about 19-22 which was perfect! 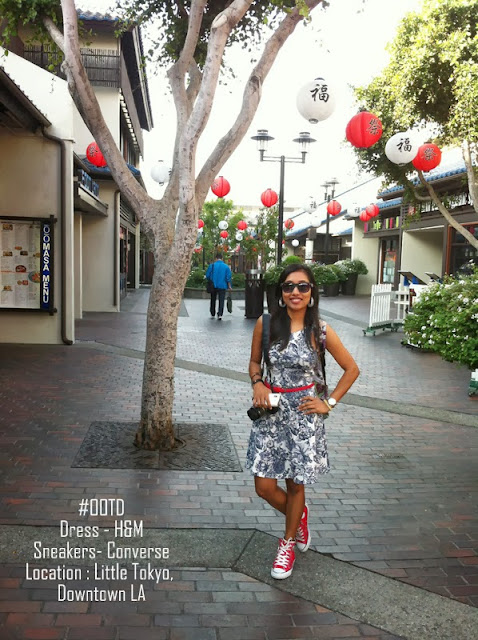 Had a good sleep the night before with comfy bed and pillows. After I had my balance of Johnny Rocket’s tuna meltz last night as breakfast this morning, I am ready to explore HOLLYWOOD. Off we were out from DoubleTree with nice weather. We searched for the nearest hop on hop off bus stops which was located at the American Japanese Museum, Little Tokyo. While waiting we met with 2 friendly Australians Christina and Maya which was also having the same direction with us. It was 920am, and suddenly we saw the red huge double Decker bus opposite of the road. I guessed we had got it wrong and we quickly hit the traffic button hoping it will turn red soon so that we could catch the bus. We managed to catch the 1st stop and hop on after showing our receipt. He handover an earplug and a map for us before explaining some safety measure and the last bus timing.

Never could i believe that I was actually in Los Angeles! Always wanted to be here and now that it has come true, it was certainly overwhelming. I really missed LA as I'm typing this. wish I could go there again.
The street are pretty quiet as people are still sleeping i guess..ahha.. Some of the places remind me of the familiar Hollywood movie scene like Spiderman, King Kong , Transformer etc. Probably some of the location were shot here.
We decided to visit Madame Tussauds first and check out the street of Walk of Fame, Chinese Theather, Hollywood sign, Beverly Hills, and just chill around that order. While we are battling with the strong wind on top of the double decker bus, we also managed to listen through the bus narration on how Hollywood name came about. So if you are first time here, i suggest for you to take this tour as it is not only 'educational' but also hassle free to move about. Who know you might also spot some real celebrity.


So after rubbing shoulders with some of the celebrities at the wax museum, we had our nice lunch at California Pizza. well..if you are in California, you gotta try their special pizza.Upon checking in, I noticed that by installing the California Pizza application in your mobile, 1 free CHicken Tinga Quesadilla will be given for free with at least 2 main course dish were ordered. So after installing the apps, I just need to flash the apps and show it to the waiter. easy peasy.
Then we just wandering around Walk of Fame street, get some souveniers and suddenly was approached by this local tour guide for Celebrity Mansion tour. It costs us US20 per person which a little disappointing as we only get to sit on the ride and take picture from afar. But anyway, at least it was cool to witness the mansion of Katy Perry+Russel Brand (before they broke off), Britney Spears, George Clooney etc at Beverly Hills. 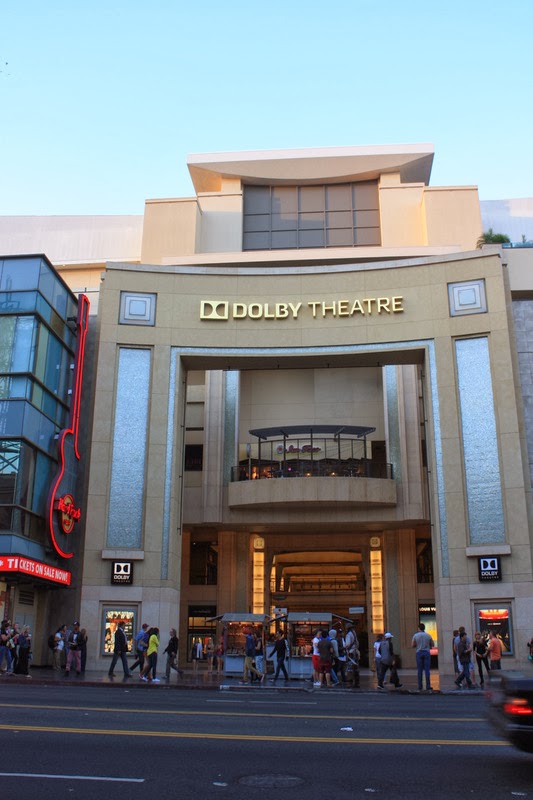 By the time, we are done, we head back to Hollywood Boulevard to check the night view and for the last hop on hop off bus before heading back to Downtown LA. Grab Subway sandwich for dinner and then it was wifi all the way...Heck..cant live without the internet.. 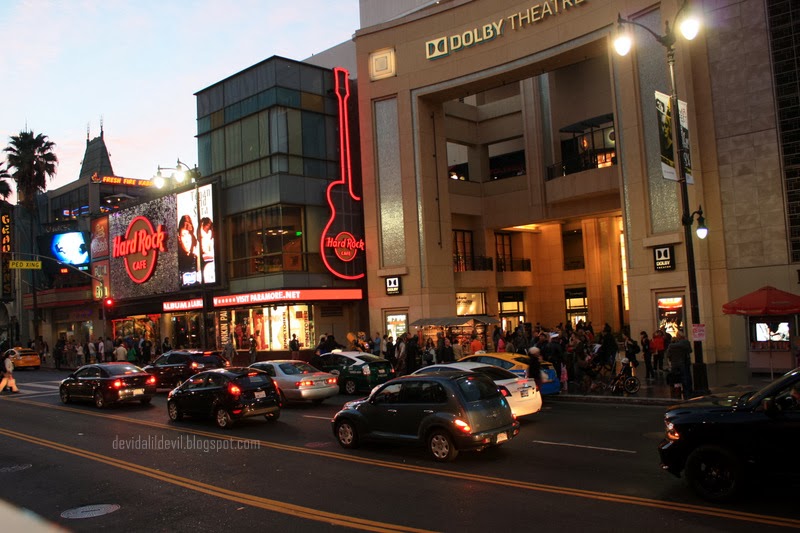 Okay, next post will be another familiar place where you normally watch on HOllywood movie or teleseries. So wait for it..Bye for now!

You may also check out the rest of the post about my LA trip :
1. Ultimate Dream Trip
2. Beverly Hills and Santa Monica
Go figure by Devi da Lil' DeviL at Friday, January 24, 2014 No comments:

It touched my heart deeply when for the 1st time I'd anticipated the Thaipusam celebration at Batu Caves in 2013, so I've decided to come again this year and seek for the blessings from Lord Muruga. I took the KTM from Sentul this morning for another glimpse of intense crowd and overwhelming feeling of humbleness. Just 4 stations away that cost RM2, I suggest you guyz to bring along your touch n go card as on my way back, the queue for train tickets are crazy. Luckily I bought mine so it was an easy pass through. 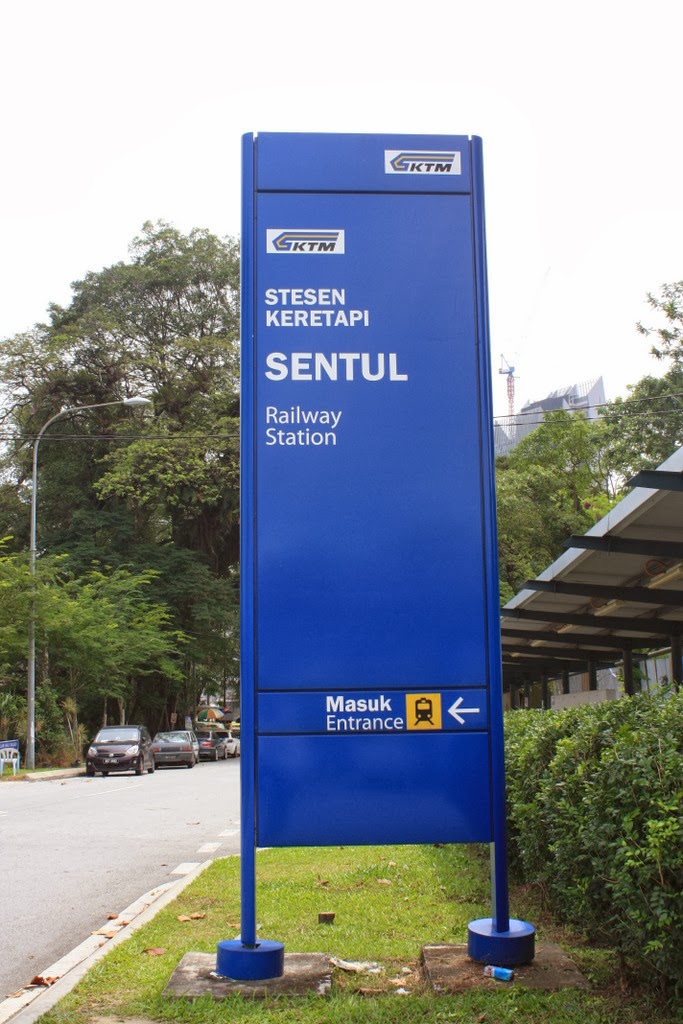 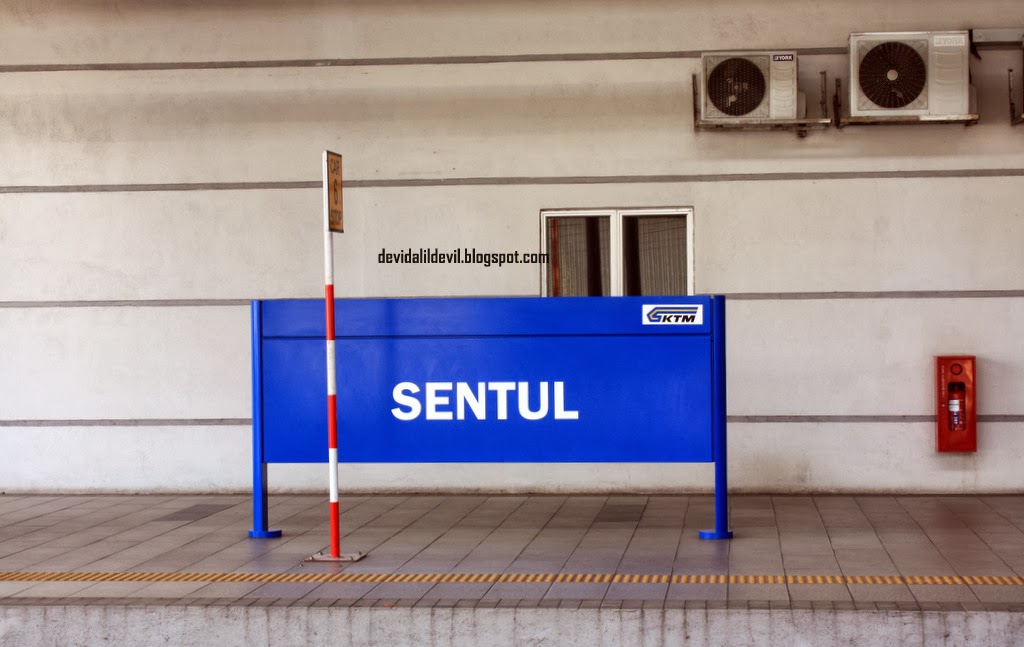 Upon reaching Batu Caves station, it was just a stone away to the temple. As I was walking through the massive crowd with hundreds of stalls selling from vegetarian foods, sweets to sarees and prayers item, I could also hear the loud chanting of 'Vel' Vel' with colourful kavadi. 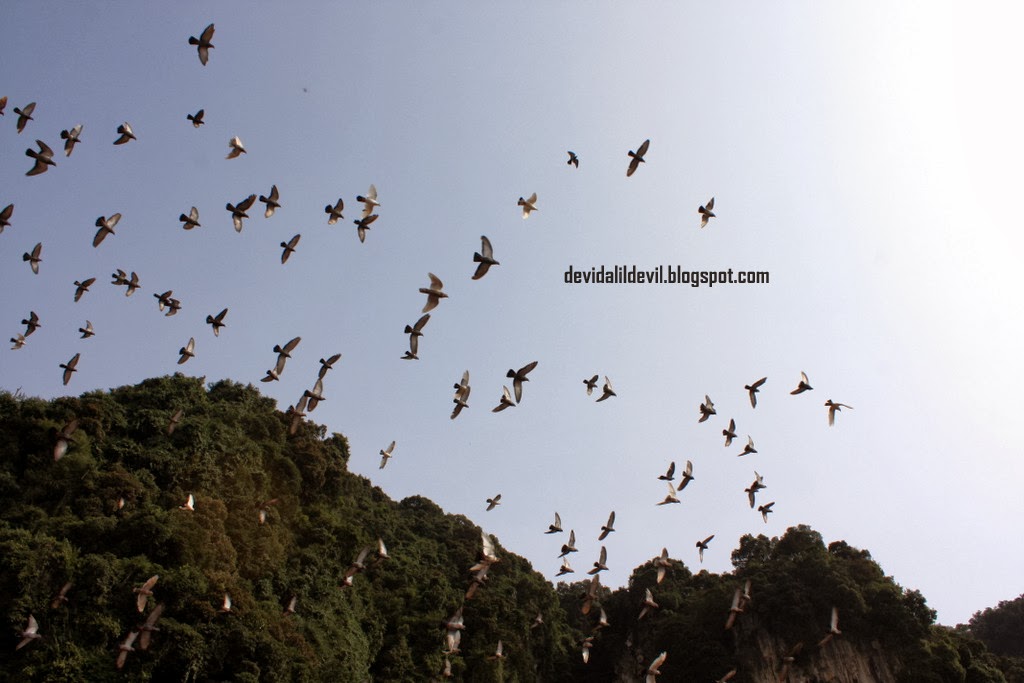 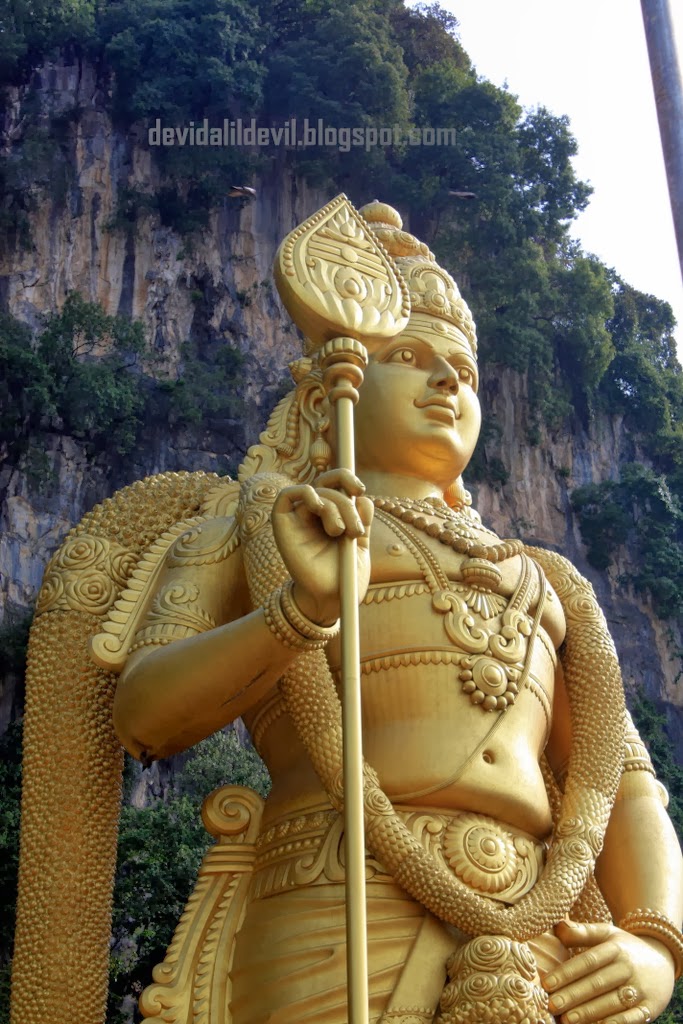 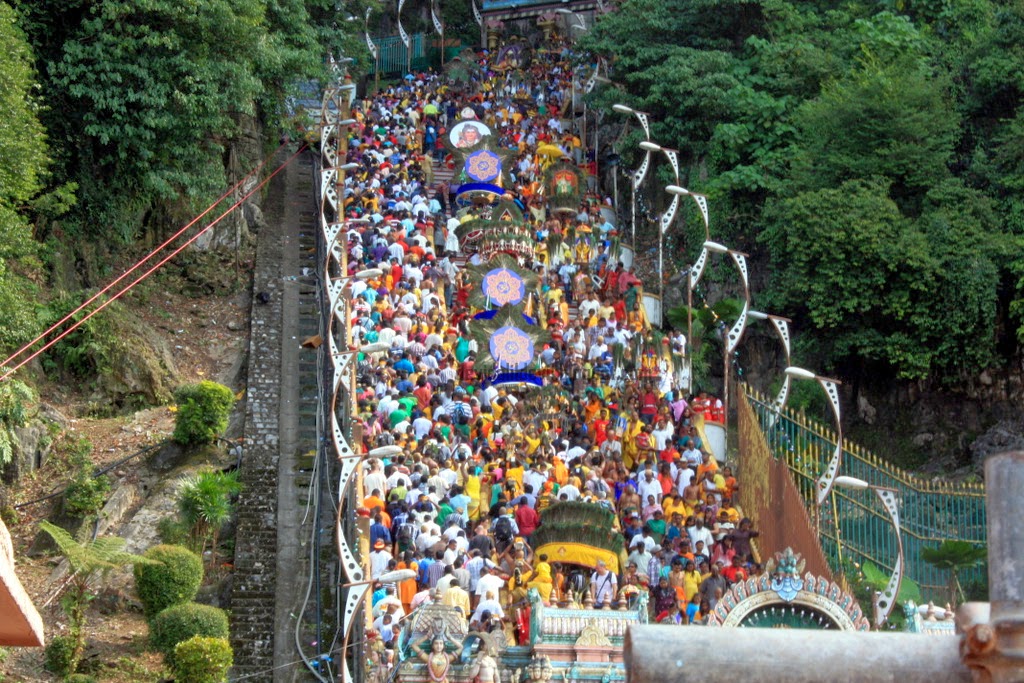 As some of you are aware that Thaipusam is a Hindu festival celebrated mostly by the Tamil community but it has also been widely spread that includes Chinese, Sikh or even foreigners are participating this sacred and holy day as well. Till this very day, I am still amazed of this whole process. Truly an unique festival that seeking for God's grace and blessing to destroy bad traits. 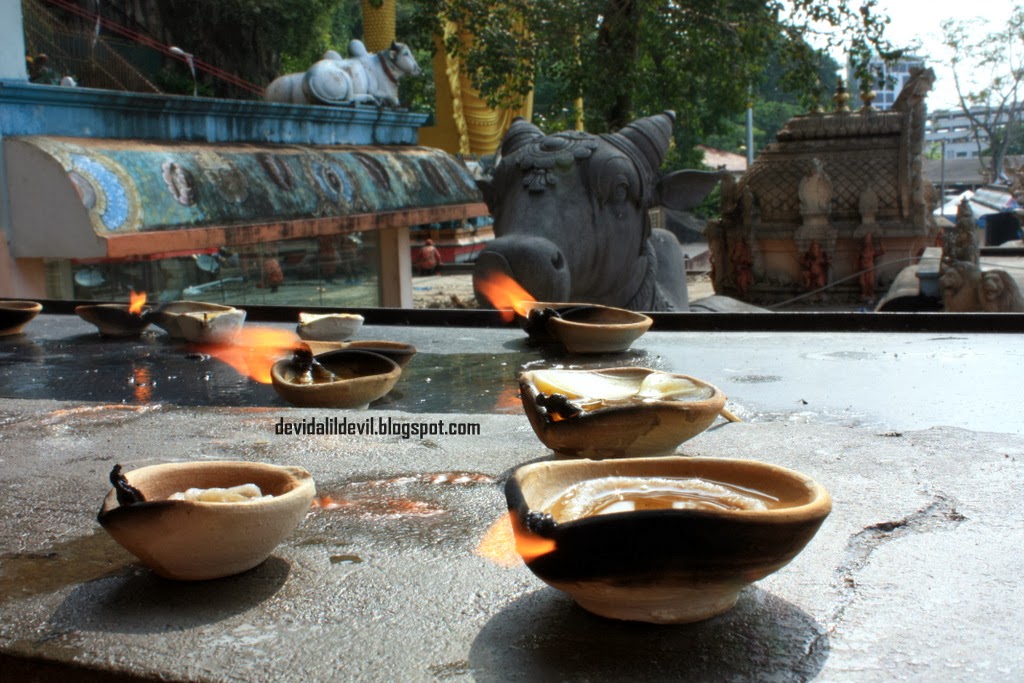 I went straight to the temple at the foot of the 272 steps stairs and pray for blessing and ask for forgiveness from the Almighty. It was a very humbling experience as one the trance devotee placed the kum kum on my forehead. I felt the presence of peace and liberation. As if some of the burden were lifted off from my shoulder. 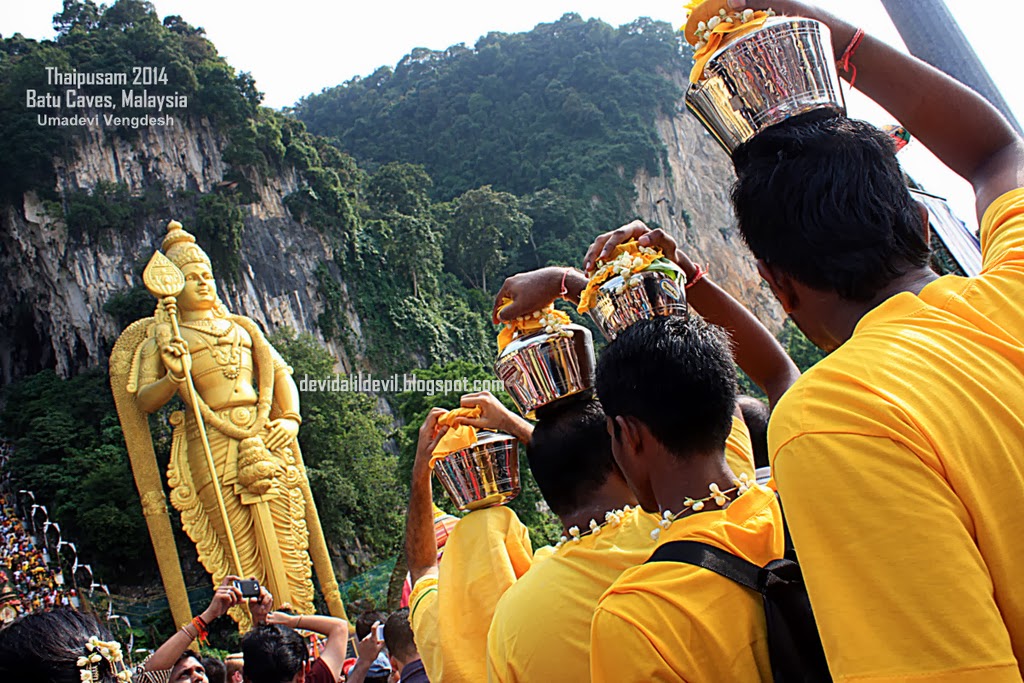 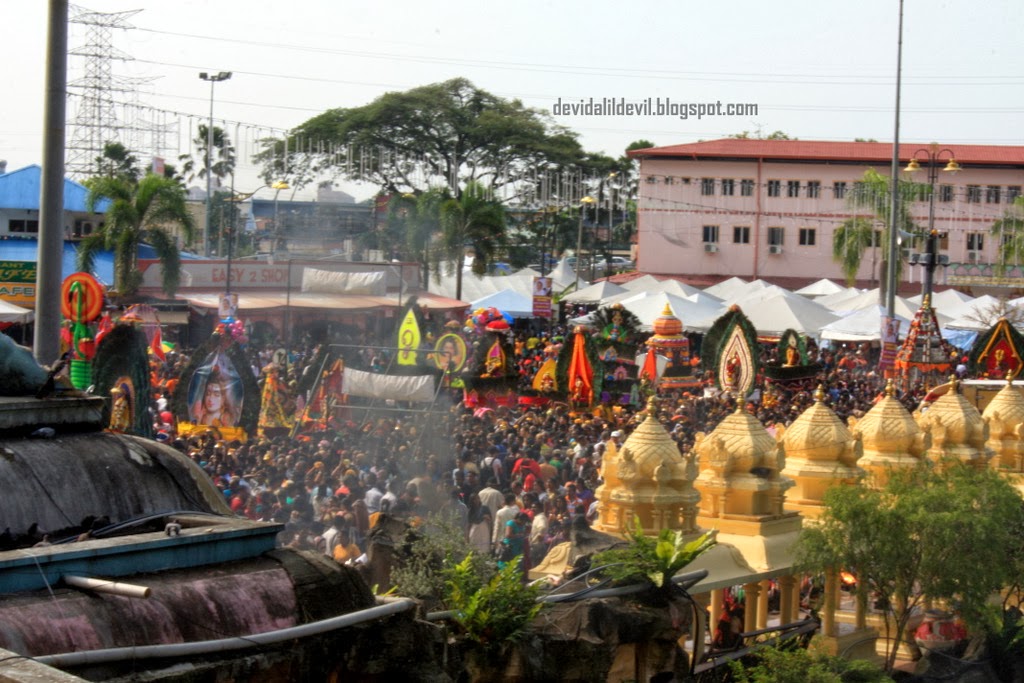 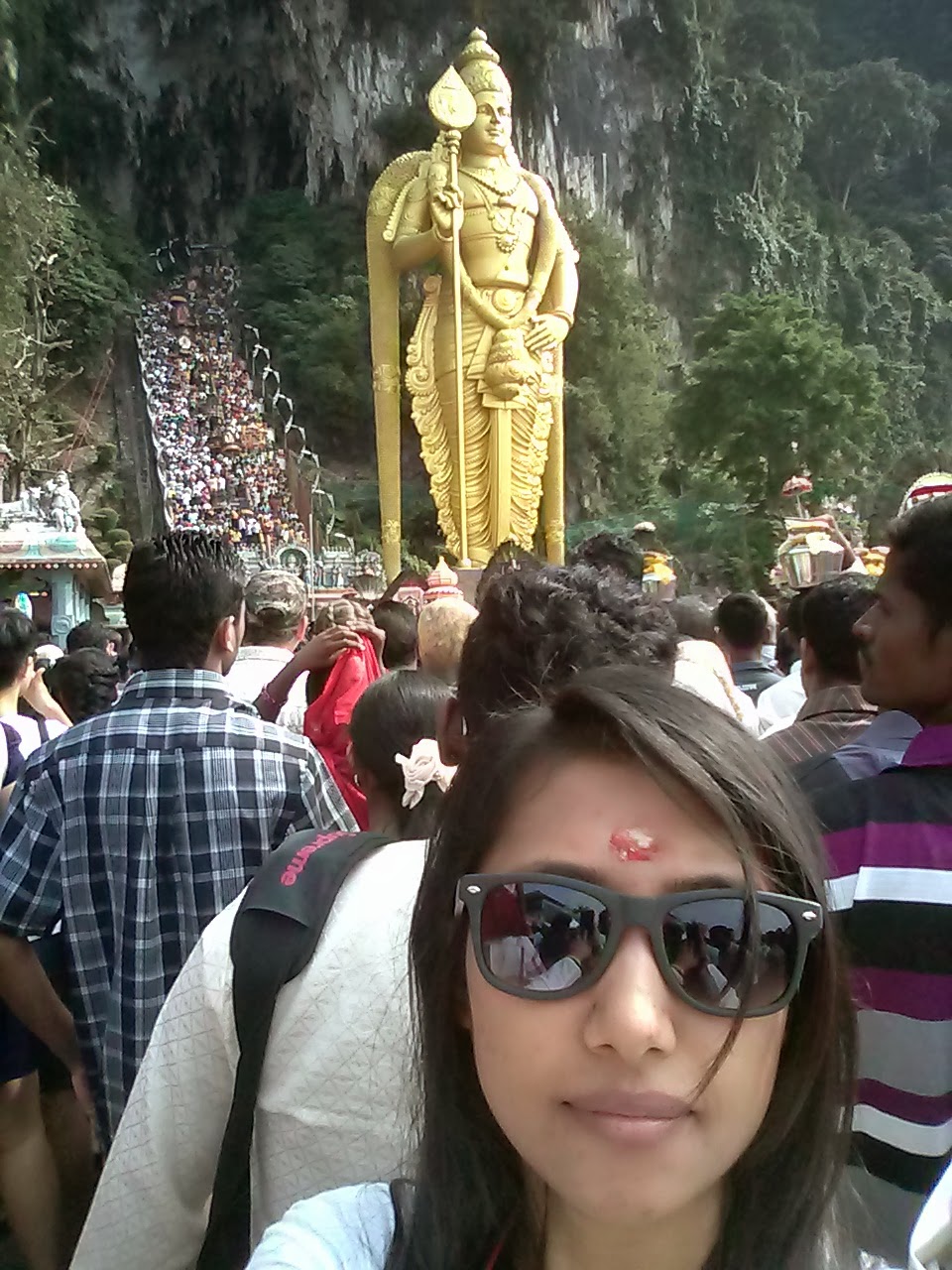 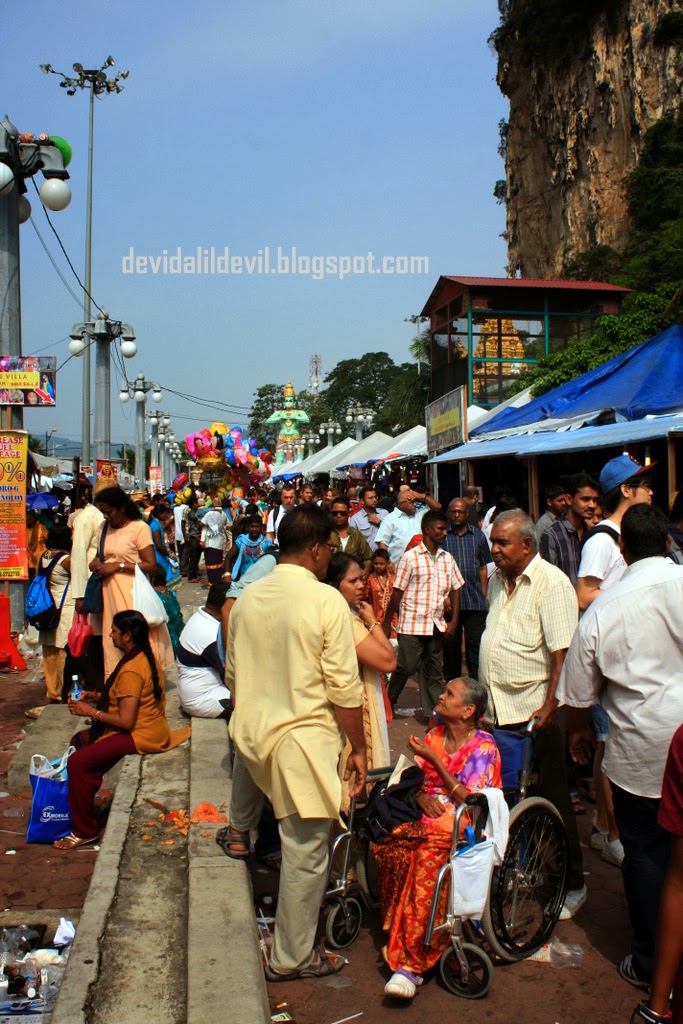 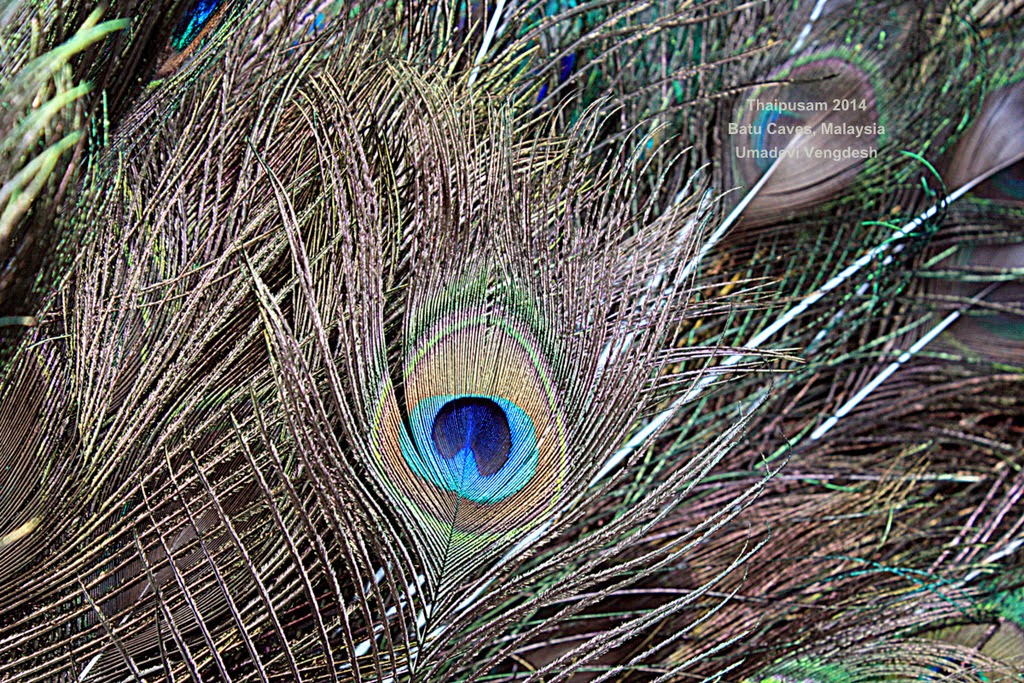 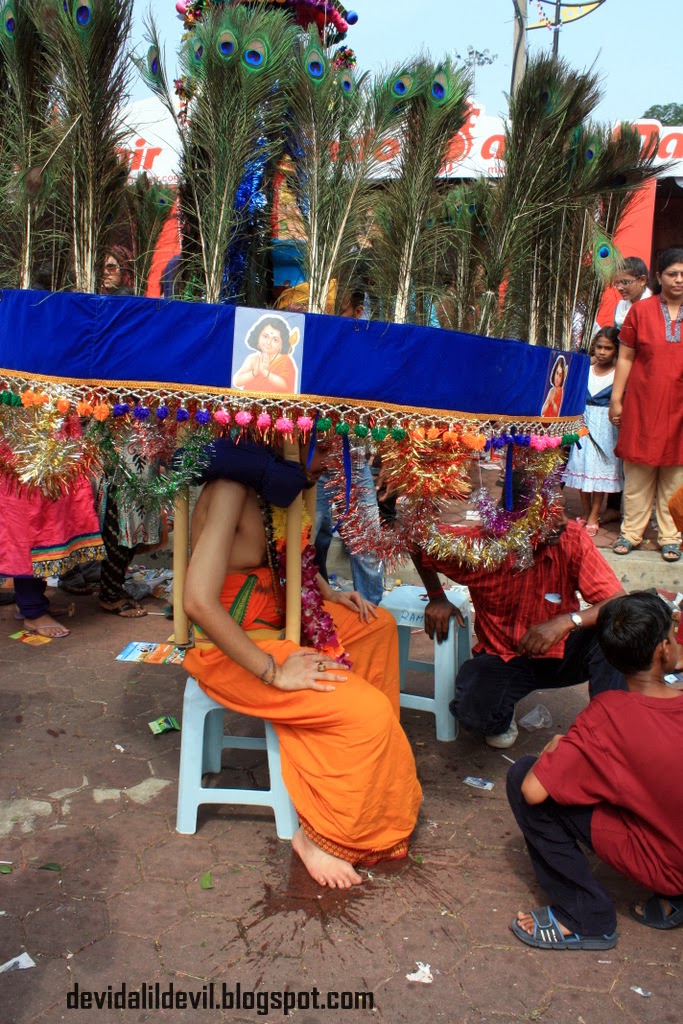 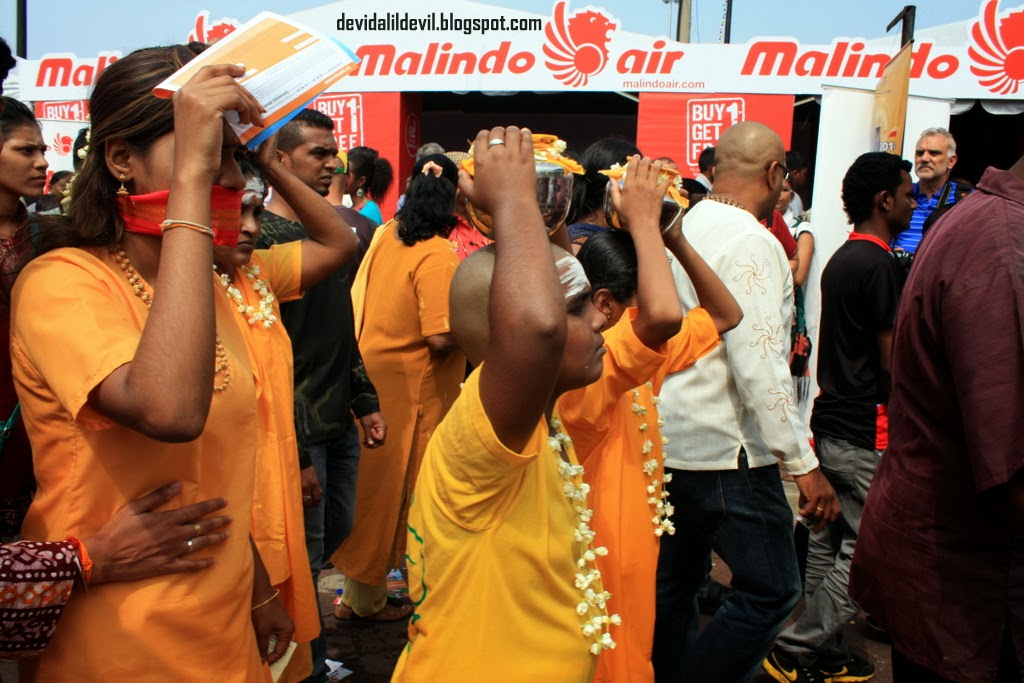 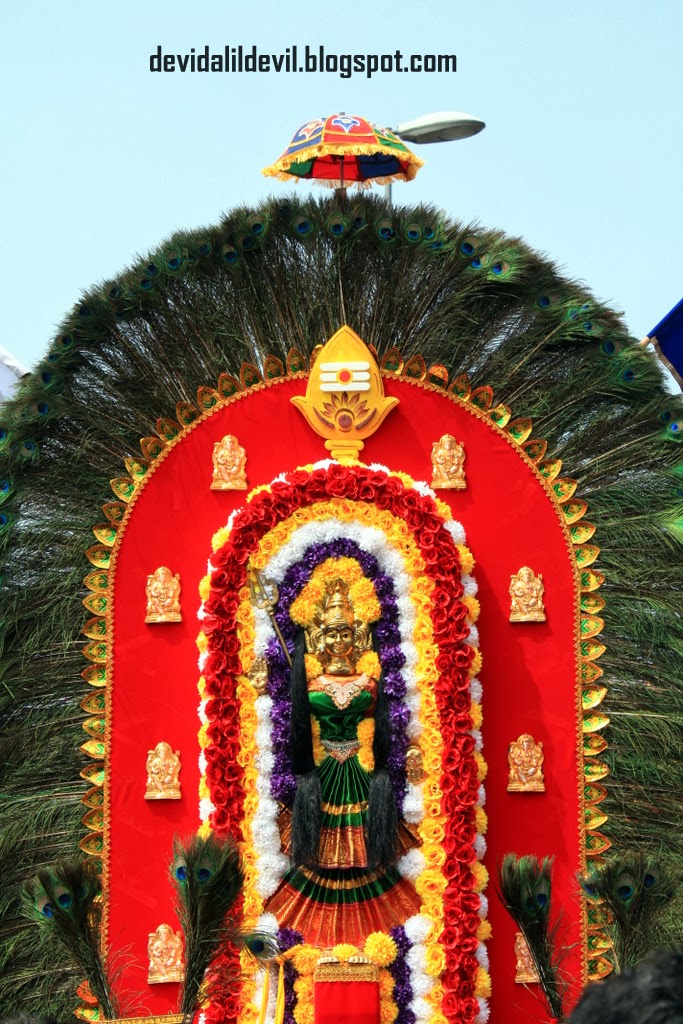 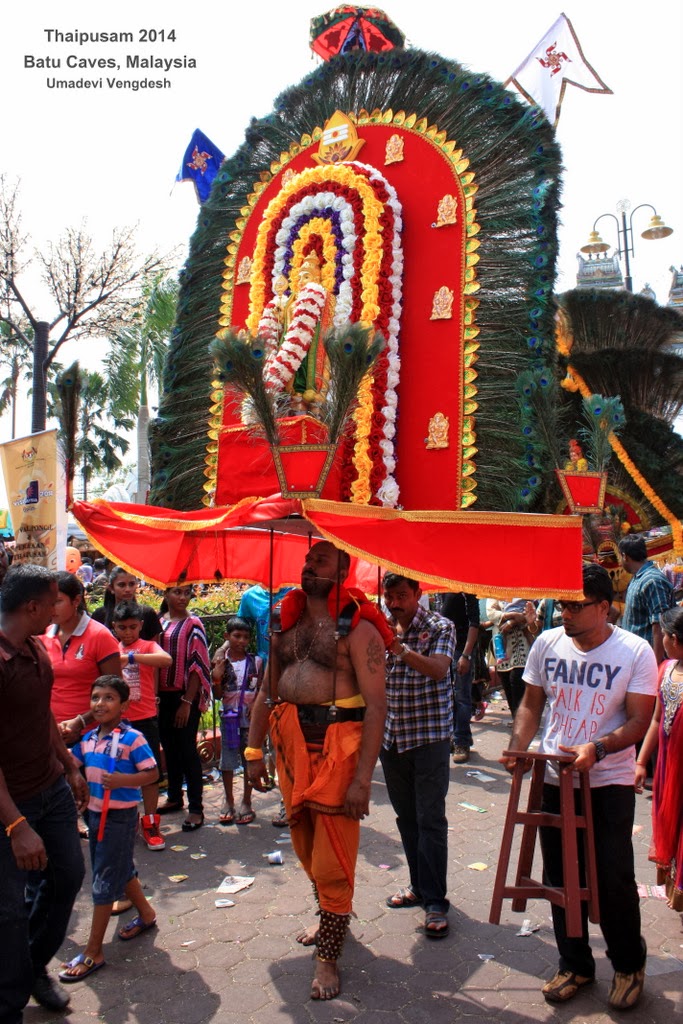 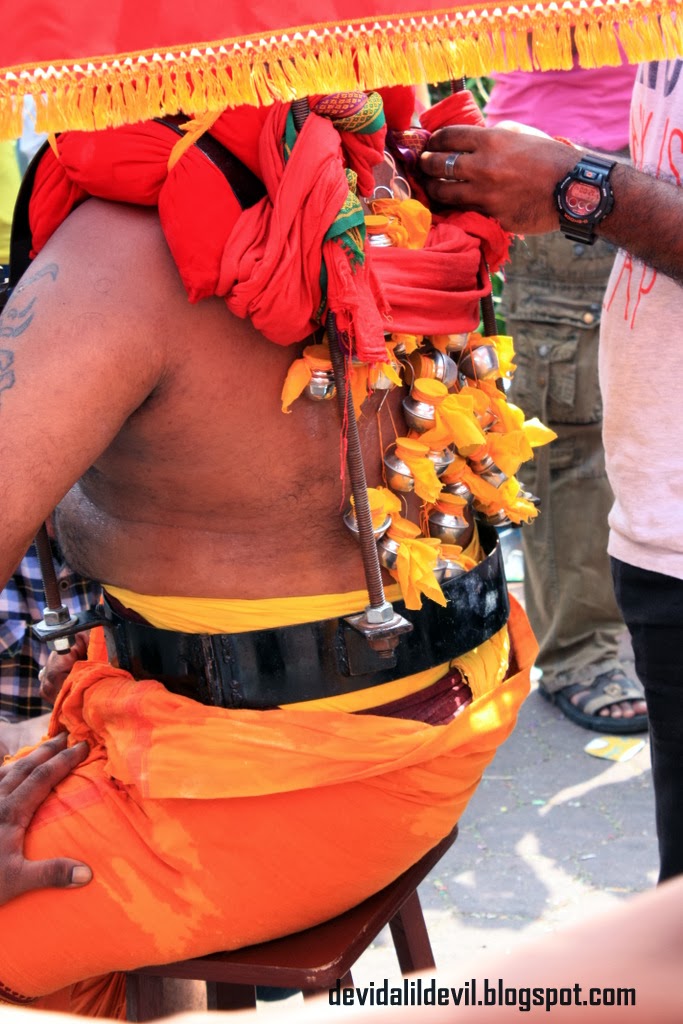 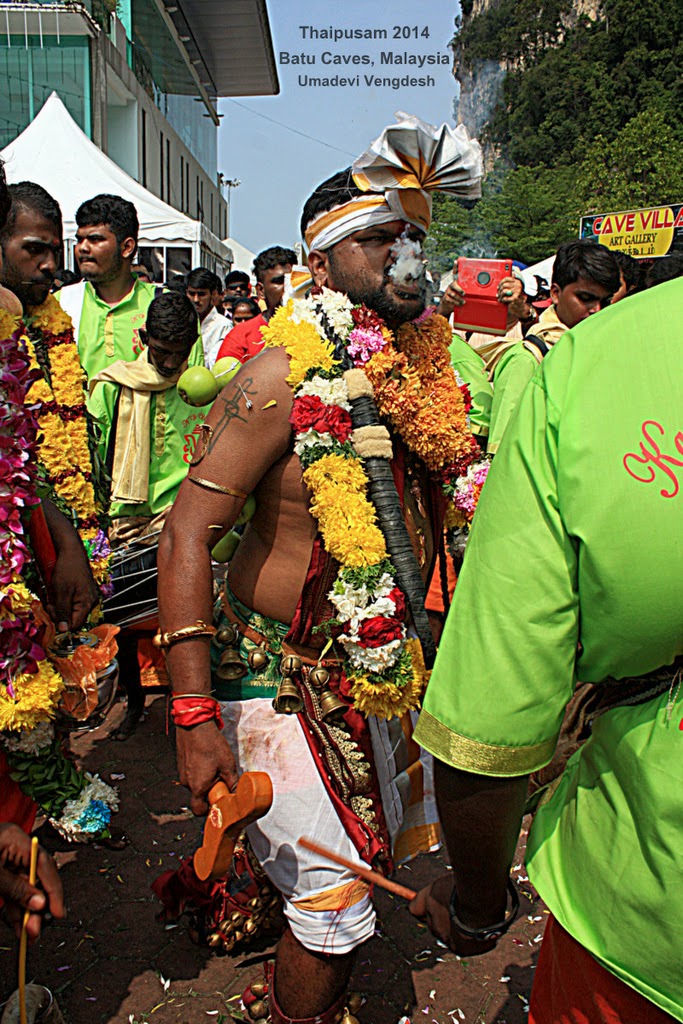 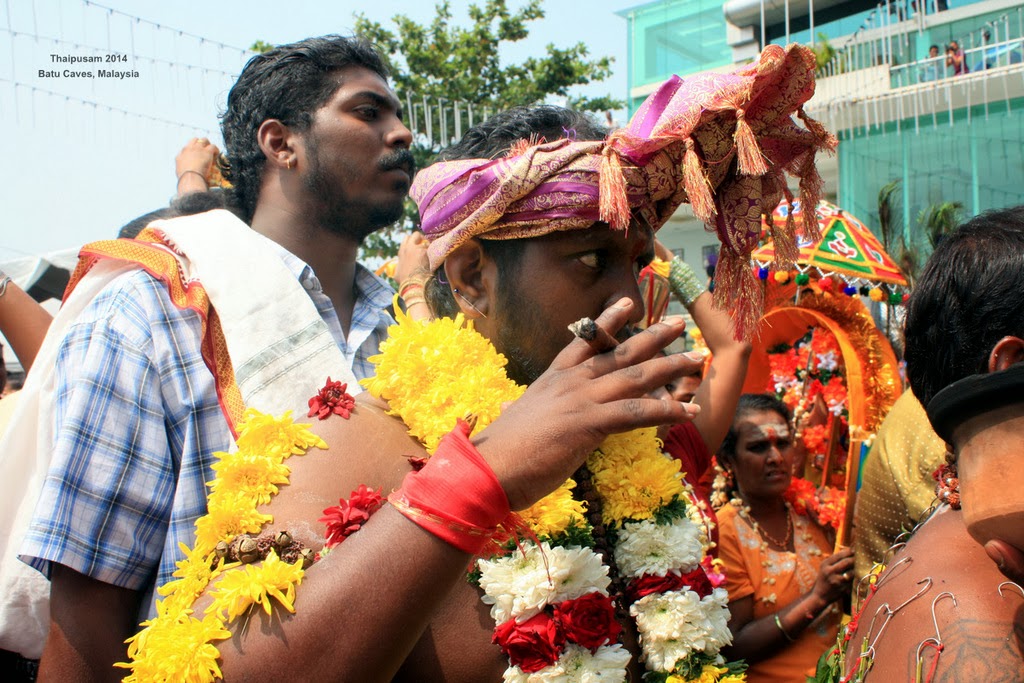 A video clip for your viewing on the anticipation at Batu Caves during Thaipusam this morning.
Like piercing my soul almost effortlessly, Batu Caves was smoked with great energy of redemption and inner peace. I don't really know how to describe the feeling, but I certainly felt the force and spirit of enlightening. It's like giving me so much strength to feel so alive.  As the chant of 'Vel Vel' breaking the air enthusiastically, goosebump was crawling in me. A miracle and unexplained mystery of the devotees being in trance, I could just stop and stare with astonishing feeling of inspiration. I am certainly blessed and lucky to be raised as a Hindu. Om!
Go figure by Devi da Lil' DeviL at Friday, January 17, 2014 No comments: