The Maze Runner and Escape Room by Churp Churp

Last Sunday morning (like one of No Doubt's song title) was filled with brain cracking session but it was all good. Thanks to Churp churp, I get the chance to watch the premier of The Maze Runner at GSC Berjaya Times Square that morning. After redeeming my tickets, Suran invited me to join the other contestants at the Escape Room challenge. (Thanks!) Since i've wanted to try out but never had the time, so i was thinking why not. Beside the prizes looks so cool especially the outdoor tent! 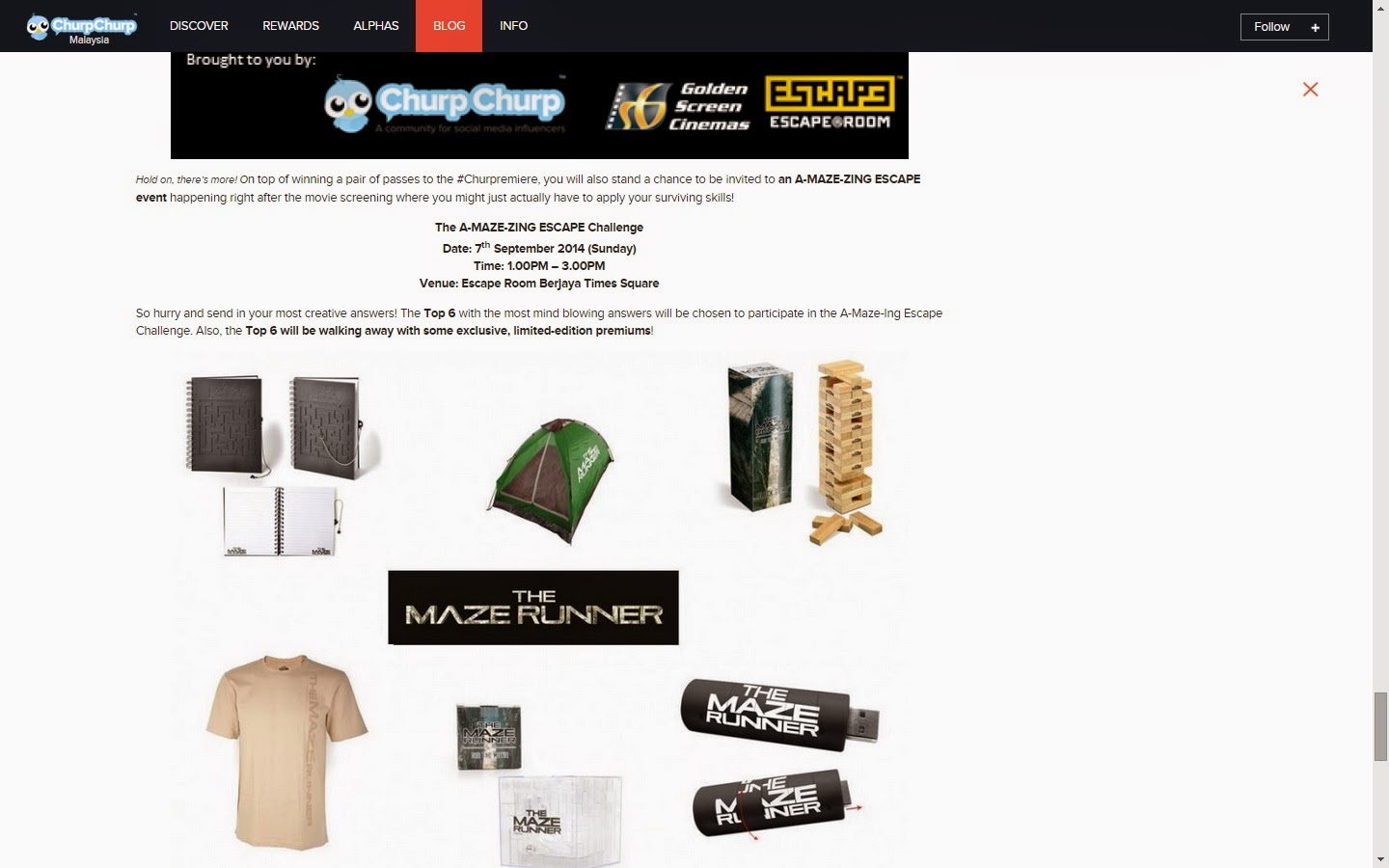 After had my heavy breakfast, i went in to the cinema for the Maze Runner. The movie started with a boy named Thomas who apparently forgotten his name, being elevated inside a lift to a remote place with other bunch of young boys. It was actually a maze where they were trapped for almost 3 years there. Most of their memories was erased and it was like a community (The Glade) with council members of leader, 'runners', chef, doctors etc. Every 30 days, new boy will arrive. 'Runner' was appointed due to strong capability to run and their job was to map the maze as it changes periodically. no wonder they cant escape because the route changes each cycle.

The movie a little draggy in the beginning, but i like the part when this alien spider (Griever) kicks in. Its like part of transformer + alien invasion fighting with those young boys.  Thomas's curiosity and the urge to survive was the key to escape from that crazy place. But i must give credit to the other 'runner', Minho. His athletic built and the way he runs is super cool, as if the character was made for him..hahaa.

Then suddenly one fine day, a girl was transported instead of a boy. That girl reminded me of the lame character, Bella from Twillight saga. But sadly the youngest boy, Chuck was killed at the end which was also very close to Thomas. So why does the boys being trapped in the maze in the first place? You got to watch the movie for yourself and be prepared as phase 2 (sequel) is coming at cha!

After the movie, i went up to 7th floor and waited for the rest for the challenge to start. 2 teams were formed and my group consists of Mordred, Joyce, Wai How and Khai Ling. I am not good in cracking clues or puzzle but with the help of my friendly team mates, this games seem to be educationally good for the brain. haha
Get ready for our first game - the Vampire room. it was pitch dark and a lot of bats hanging on the ceiling. We were handcuffed and was given a short brief before the game started. Some of the clues and hints was really difficult for me to digest, however we managed to understand after we used to help button and some explanation from the marshall.
Each challenge was given 45 minutes but we felt like as if it was only minutes inside. We didnt even realized that time flies so fast. So by the time when we received our prize, it was just the tshirt, maze box and a poster? errrrkkkk...could be because the sponsor have not pass it to the organizer. Anyway it was nice meeting new group of treasure hunters and thanks Churp Churp for the movie and amazing Escape Challenge.

When I knew David Blaine is coming to Malaysia for his Real or Magic Asian Tour, my mind was simply bursting with excitement. I used to watch him on TV and Youtube where he kept making my medula oblongata goes flabbergasted with amazement. So, as a believer of a contestant, i went contest hunting for David Blaine's ticket show. Finally I've managed to score from 8share intagram contest #magicalmalaysia. Thank you 8share malaysia!! And of course, deep down I wish I could meet him personally, but only time will tell..hehee. dare to dream.
U dont know who is David Blaine?? oh my..he is the next best thing in the world of magic or should i say reality? He is well known for his high profile of endurance, life threatening feat, an amazing illusionist and a street performer. But that Friday night (5/9/2014), he proved to us, he was not only all of the above, instead he gives us hope where when you put all your determination into faith- it will prevail, he was obliged to his adoring fans and also injecting a little sense of humor into his performance. It was more than a show or illusion, it was mind boggling confusion that leave you breathless and neverthless nothing short of astonishment. He was like connecting to us live with his seductive wits in that chilling Stadium Negara. I am ready to be dazzled.


Took the monorail to Hang Tuah and it was few minutes walk to Stadium Negara from there as I don't want to get trapped in the traffic. Upon reaching there, the gate was not open yet, so it was quite crowded. At last about 830pm, the gate was opened. Went in and find for a good spot.
By 930pm, the show finally begins!  And there he was on stage, with my new compact Canon Powershot SX700 that zoom like magic! loving this canon. With his usual black Tshirt and black pants, i could feel his strong vibe accompanied by the cheers from the crowd.


He was very much attached with the fans and i thought how lucky they were to be invited up on stage with him each time before he would start his performance. Most of the performance was what I have saw on TV, however it was still mind blasting! His usual monotonous act on tv has been snapped the total opposite that nite, once in a while he was quick to show his charming smile and even asked all the audience to get their cameras/videos to record it there and there. So no security guards was mad at us for doing so.  such a cool guy! hahaha! check out his opening act!

From drinking 3 litres of water from 6 unopened mineral water bottles and spitting it out like a hose pipe to wash down the fire with his initial, to some card tricks to (go figure) forecasting the last piece of jigsaw puzzle from the audience to poking his palm using ice picks to his last unbelievable feat stunts of holding his breath for 8 minutes and 36 seconds!, he kept us seeking for the truth whether it was just part of illusion, real magic, science gimmick or an alien invasion. Either way, there were so many questions mark flying around.
He even jokingly said to the crowd that if something go wrong with that ice pick trick, that would be the end of the show. Not to worry coz he has few other magicians line up for us. unusual for him to say that but yeah..he even warned to all parents with kids to please close their young ones' eyes before he proceed with that eerie trick.
After that he left us with 3 other performers/magicians as he need to get himself prepared for the final stunt. First it was a dance act by a French hip hop dancer, Salah Benlemgawanssa (you can follow his insta at @spidermanasalah1979).
His body moves like a crafted rubber..going on slow motion to fast paced. Check out his performance here :

Followed by another French magician Yann Frisch (kinda Charlie chaplin) where his nerdy character play along quite well with his scruffy hair and trick. And the host himself,  Todd Robbins with his crazy nail hammering into his nostril, bulb eating and balloon trick from his nose to his mouth..gruesome and looked painful to me.


And finally the moment we are waiting for, out of the blue suddenly, we noticed that David Blaine was not on stage, but he was already ready to dive in into a huge water tank filled with nemo, dory and other fishes for his final death-defying acts in the middle of Stadium Negara.

While he tried his level best to stand the endurance of holding his breath underwater in that water tank to outdo his last attempt for his Malaysian fans, even then, we could see a note of smile on his face. I took this opportunity to went up to get a closer glimpse of him.


He actually waved and called the audience to come closer while doing his life threatening feat, and as I was terpukau standing behind those bodyguards, i quickly jumped in as i feel like he was waving at me..LOL. i duno what to do and since i am not your usual selfie freak, i actually stood next to the water tank and trying to adjust my Nexus4 like a confused child. But thank god, i managed to snap a selfie with David before he turned and facing the opposite direction for other fans. :)
I was smitten..His dreamy eyes, his laid back character, cool and enigmatic, his aura was simply magical to me. how can he still look very calm holding his breath underwater??? hatiku cair..haha like there was a cast of spell, his intriguing curiosity made my admiration towards him even deeper than before.

He did it like a champ, 8 minutes 36 sec and while he came out of the tank, cold and out of breath, he was still giving his moment by allowing fans taking selfies and shaking hands to the cheering crowds. I managed to tap his elbow..hahaha..maybe after this my life will be filled with more magical adventure..hahaha

The showcase ended at 11.15pm. Final photo before going home with Todd and he placed a nail into his nostril.ouch!

Thank you very much LOL events for making this a reality and all this would not be happening if not for 8share for the tickets prize. woots..:) i still cant believe .. it was like a dream that turn into a reality. thank you, im blessed. :) So follow 8share as there are more good things coming at cha!
Go figure by Devi da Lil' DeviL at Monday, September 08, 2014 No comments: