Thanks to kanmani, she tagged me on instagram to alert me about the contest. The contest is opened to public and the contest duration was for a short period of time only, probably because the event will take place on 14 -18 January 2015 which was less than a month away. I've managed to sent in my entry at the very last day. -wipe sweat!

Then few days later, I received a call from im4ufm friendly staff, Ms Effa. They had shortlisted 10 persons and I was one of them. We need to attend a fitness test which took place on Sunday, 28 December 2014 at one of the running track at Stadium Bukit Jalil. Thank god that I've been actively going to gym and been running on the treadmill starting August 2014 to build up my stamina and also to reduce my cholesterol level..yeah i was surprise myself to know that my blood has high level of cholesterol and I dont really eat oily food that much..oh well..anyway, that Sunday morning, we were introduced to Ms Anis, 2nd youngest woman to cross Mount Everest (Respect!) as she will be the one to select only the best 4 to climb Mount Kinabalu. out of 10, only 5 turned up. we ran for 6 laps which is equivalent to 2.4km and clocks in our best time. Then there were Q&A test about Kinabalu. I hope i got it right..hahaa

Once done, I went to visit my my little champs Naveen and Katriina. Then to Pusat Simulasi, Mont Kiara to donate some of new tshirts and blankets for the flood victims. Felt a little tired, so I went home and just as i want to doze off, Moly called telling me her bus will only leave at 4pm..so i went to pekeliling to accompany her. it was a tiring day but finally after on 30 December 2014, i got the news that i managed the cut. yeah!!! suddenly i was both excited and nervous at the same time...Alamak..can i do it??

I've always been that girl who loves outdoor and adventure, after all I came from a small kampung...kampung girl maaa. only during my teens that i've been 'hibernating' and had some issue going out of the house..heheee..anyway I have always wanted to do the climb, infact ive booked the flight ticket to Kota Kinabalu (KK) ,Sabah twice but cancelled eventually due to some unforeseen circumstances. Finally my dreams is about to be realized.. all thanks to im4ufm and im4u.

Our flight to KK is at 645am (14 Jan 2015), so we are advised to meet up at KLIA at 4am. Since the last bus from KLsentral to KLIA2 is at 1130pm, I decided to leave the house on 13 Jan 2015 and catch the 10pm bus instead. Upon reaching KLIA2 at 11pm, felt to sleepy, so I walked in to Tune Hotel only to be washed away with the crazy price of RM250.
Hrmm..okay, then I went in KLIA2 to check around and found out that Capsule Hotel was there..ok cantik..the price is also reasonable so I took the 3 hours with RM50 package, come with a locker key, ear plug, towel and free wifi. not bad. I couldn't really sleep even though the capsule is actually quite decent and clean. Maybe was a little nervous and excited for Mount Kinabalu expedition.
I set my alarm clock and get ready early. Then waited for the rest and finally after our light breakfast, we board the plane and I think I slept for 2 hours before reaching KK. Met the rest of the friendly im4ufm staff , Atika who is taking care of the winners, then we have Izrol the boss that ensure everything is in order, we also have Amin the entertainer financier, not forgetting Vivian, Ash, Shah, Azizan, AhLan, Faruq, Raesa, Yati, AYob ,Anep and few others for accompanying us.  For the first time I am here - sabah angin di bawah bayu...We have to wait for another hour for the other group to arrive before we hop on the bus to Universiti Malaysia Sabah (UMS).
We arrived at UMS just in the nick of time for the official launch of this Mount Kinabalu Charity Climb and Spiritual 2015. The organizing chairman, Muqharabbin Mokhtarrudin a.k.a Qhobin and all the sponsors chairman was also there to attend the one of the highly anticipated event to kick start 2015! Some of the line up for this major event to be a successful feat with the support from the following personnel and groups:

After a quick lunch, we head to Kundasang and arrived at the foot of Mount Kinabalu in the evening. It was misty, cold and a little drizzling. A little chaos as some of them didnt managed to get their room as this is quite a huge group. dinner will be on our own and there shall be another briefing before we embark on our climb tomorrow morning. We will be staying at DVilla and the restaurant is just beside our room 4. 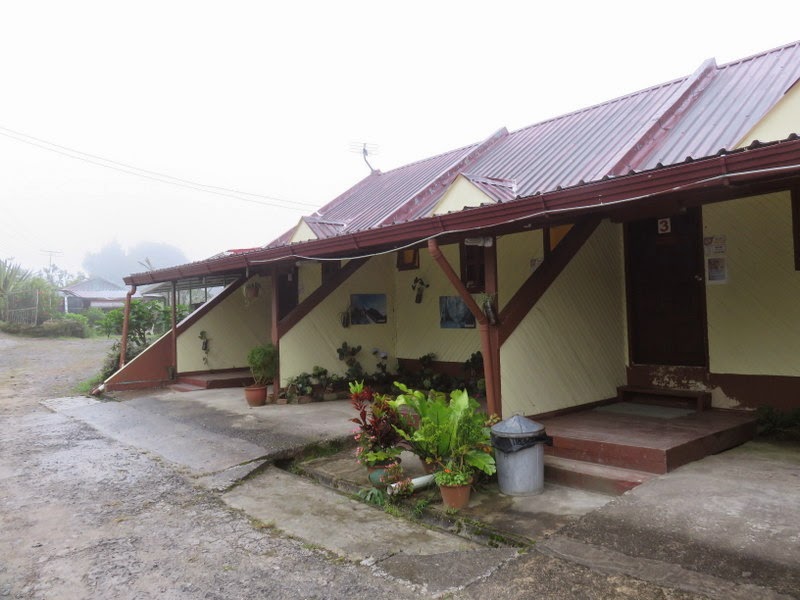 Briefing supposed to start at 8pm but ended up late and finished quite late as well. All the tired faces started to take a nap on the chair during the briefing. Anyway, as I am not the type who could sleep easily in new places, i hope i wont be running out of energy the next day for the climb. gambateh!

As we were heading home from Gerik to KL, we are contemplating to stop over at Ipoh town for lunch. Grace suggested for us to try out this famous chicken noodle with prawn broth and the egg custard. so we did and it was our first road trip together..surprisingly we only travel to overseas together but this time around it was cuti cuti malaysia! glad we did it!

All the unique murals on coffee shop / kopitiam can be found along Jalan bijih timah, quite close to Plan B / Yasmin Ahmad museum. So if you are heading to Ipoh, check out this places..definitely feels like travel back in time. :) 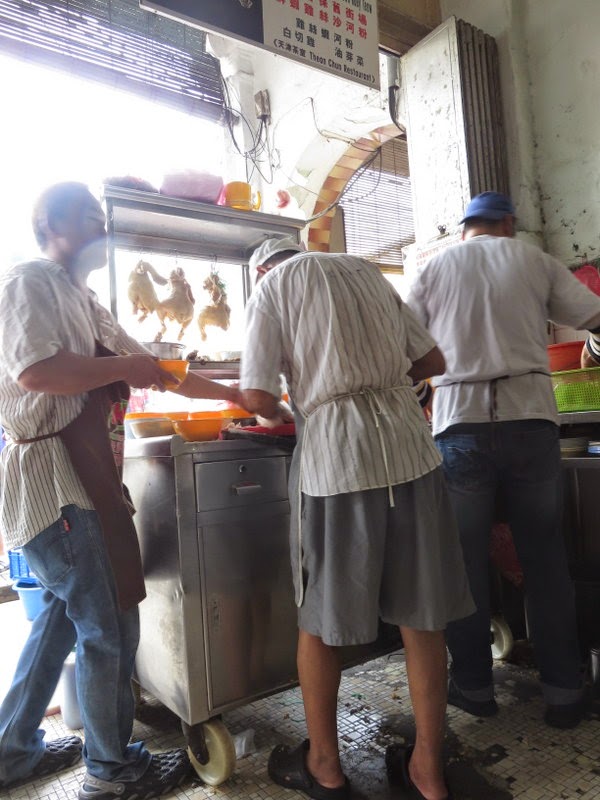 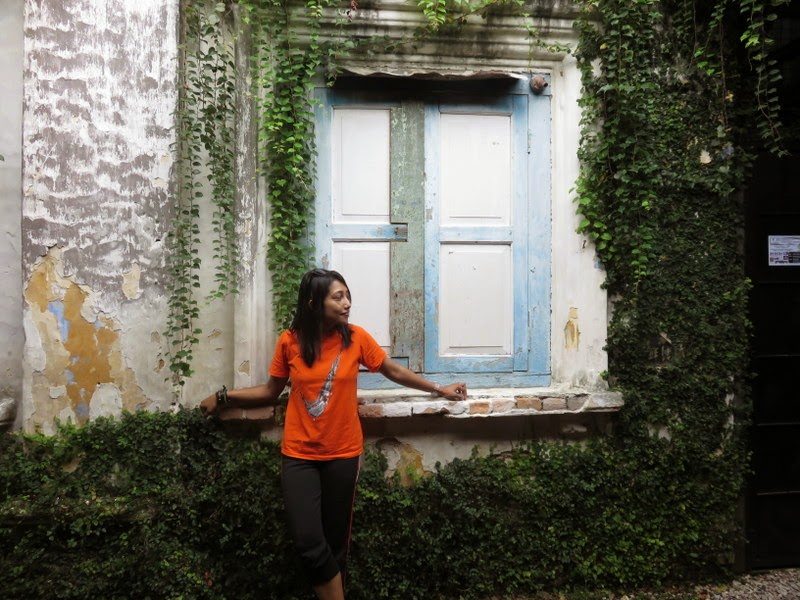 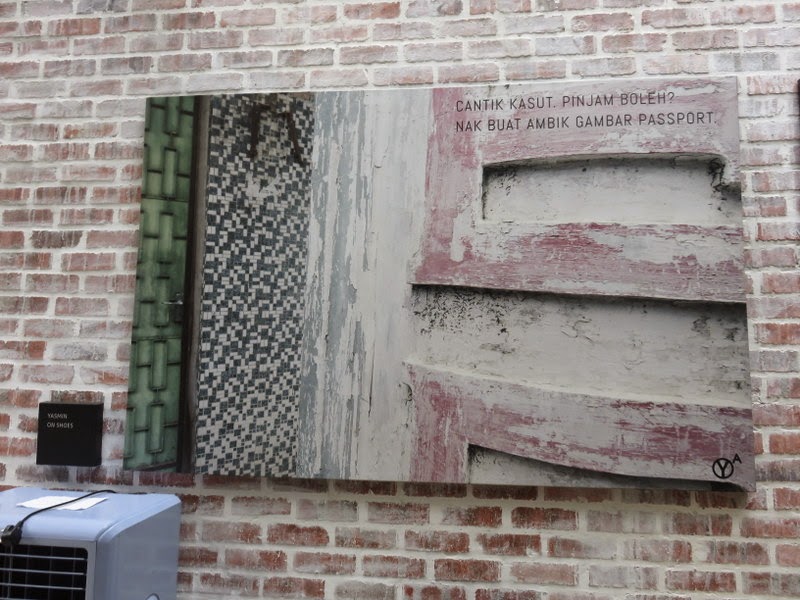 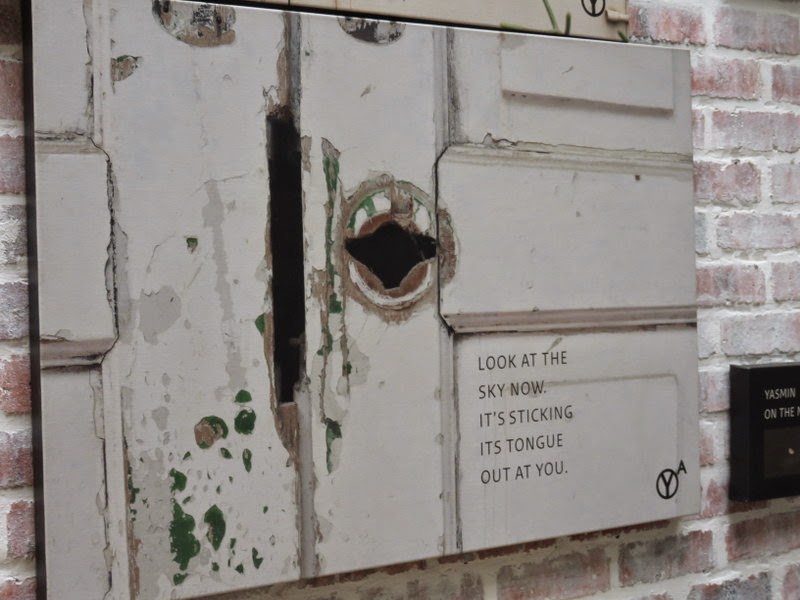 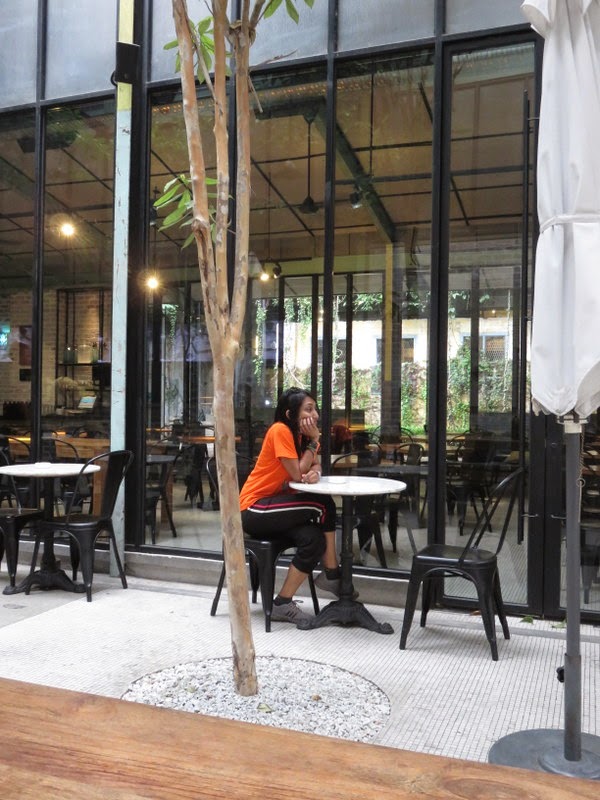 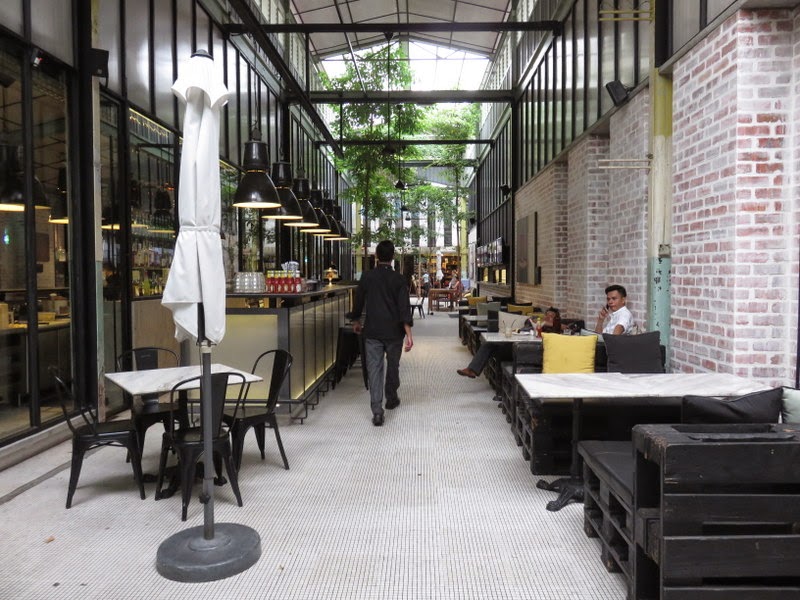 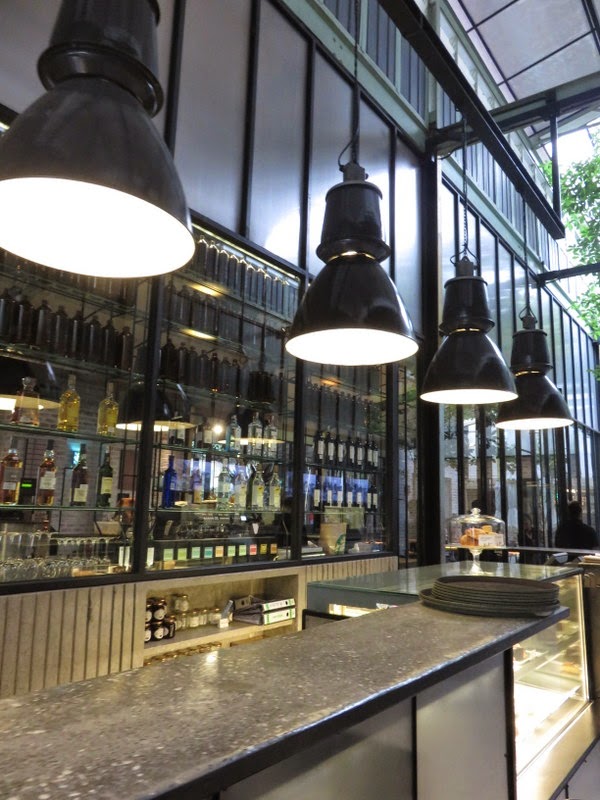 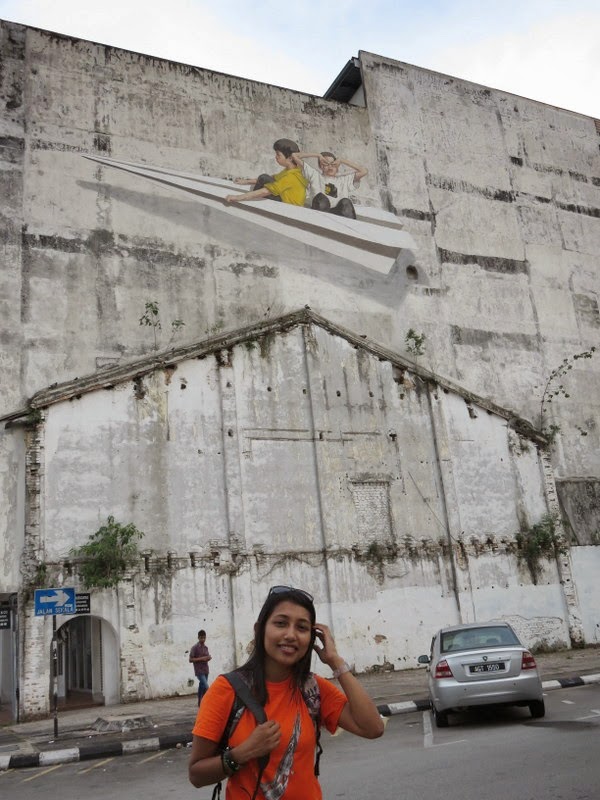 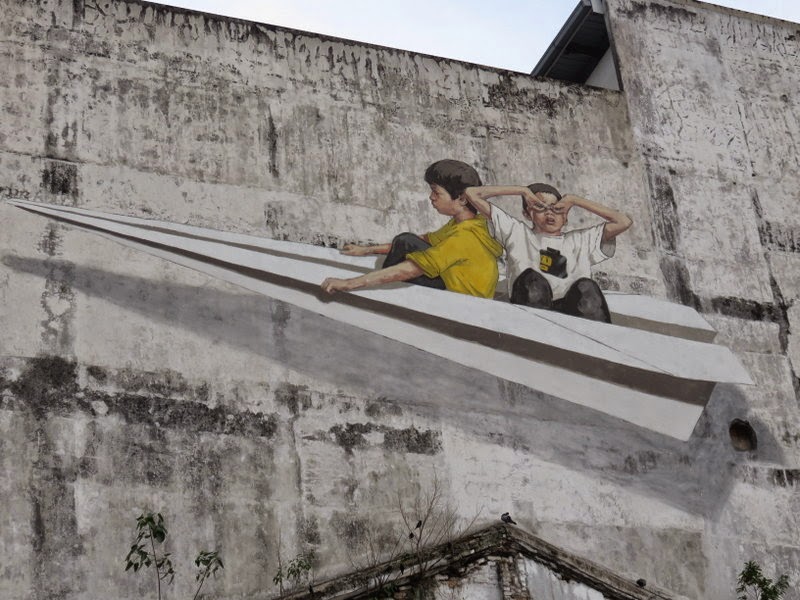 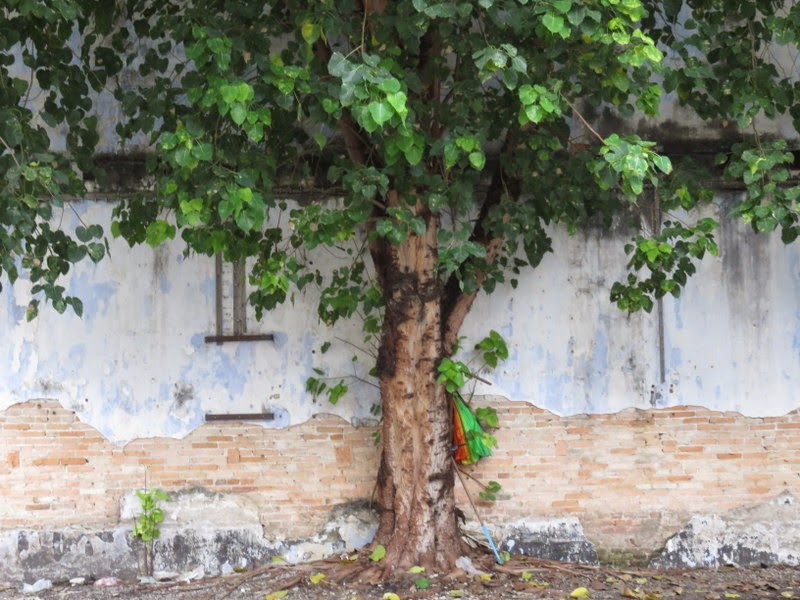 After that we started our journey back home and cant wait for our coming next adventure in the future. Don't forget to visit and share your photos too. Thanks Ernest Zacharevic for his wonderful masterpiece.
Go figure by Devi da Lil' DeviL at Monday, January 19, 2015 No comments: