Life‘s an adventure, so seize it.  I try to live my life as interesting as possible..

So last Saturday I finally get myself to try one of the extreme water sports called Wakeboarding..ahaks..I know I am a late bloomer but at least I had a heck of a good time.. only 4 years too late…:P better late than never rite?
Alright to begin with, I’ve always afraid of water and the fact that I can’t swim, water sports never was a priority in my to-do list, but it was there somewhere in between or at least close to the bottom. I’ve tried both water-rafting and sea kayaking at Phuket , Tube rafting at Taman Negara and parasailing plus jet ski in Langkawi. Maybe I was putting the motto “Fear is not a Factor” in my head while indulging myself in those activities. Anyway, one fine day I registered myself at Dealmates website coz firstly, it offers so many awesome outdoor activities with great discount which I’ve already been missing all this while. ..arghhh…Secondly because I want to live my dreams.. no pun intended.
Alright so the package I bought was a One-Hour Wakeboarding & Coaching Session for 2 persons at Mines Watersports from DealMates. Guess how much? RM90 only instead of RM260…woots! Thank you for that! So the deal was sealed and I called Mr Gary, the cool man behind Performance Watersports Sdn Bhd for the arrangement. We took Joshua along but he has no clue on where and what are we planning to do on that day..hehehe.  Upon reaching Mines Wellness Resort, we head down to Level 1 and went to the beach walk passing by the swimming pool.
There, our friendly Li Li brief us on how to wakeboarding and I was told Gary is in the boat at the middle of the lake with another 2 persons for wakeboarding session. 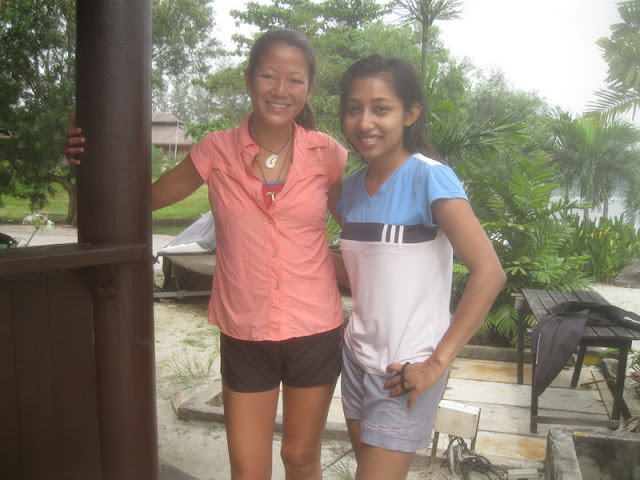 Then she asked me to sit on the floor and imagine myself on the water. Knees closed to my chin, legs stay on the position as if I’m squatting and both elbows closed to my knees with both of my hands holding her hand as if it was the handle. So she told me never to initiate as she pulled me forward. I guessed I wasn’t paying attention..huhuhu…let the force push me forward, and keep myself in a squatting position before slowly moving upward but keep my balance on bended knees with one leg slightly forward than the other. Sounds simple right? Hrmm…now let’s put that into practice..GULP!

While waiting for Gary to finish the session, we went close to the shore and got shocked to see there are so many huge fishes swarming around while the tourist throw in some bread on the pitch black water. One of the fish looked creepy ..i think it was a catfish.
Few minutes later, Gary arrived with his speed boat,  B, Joshua and I went in and I could see Joshua was a little pale upon reaching in the middle of the lake. Since it was lady first, so I tried first…Gary gave us the floating vest and sprinkle some soap on the shoe board. I placed both my legs into the boot and strap it tightly before went in to the water.

He repeated what Li Li has taught me earlier. Then, I was released in the middle of the lake. So I was basically floating like this..hehehe.


Then Gary controls the boat close to me so that I could grip the ironbar, and I have to put the theory into good practice right now.
First few try..i failed miserably. …and I thought to myself....dang..it looks so easy in the tv or youtube but certainly it was hard when you start doing it yourself.

But Gary was really patient with me as I keep asking questions how come I keep falling?..kekeke As the minute, I got the hang of it, I would immediately fall face flat on to the water. And I think, I did drank some of pitch black water while my head was down under before floating back up…errkkkkk.. He told me that I initiate the move  and  my elbows was floating on the air while supposedly to stay close to my knees. My 15 minutes was up, but I was already so exhausted..geez..reality kicks in..Fuh..but at least I know the feeling of it. Hopefully I could do better for my next 15 minutes

Then it was my turn again..I was already tired, but Lil'Devil gotta do what Lil'devil do best.

So I determine to make it right this time..huhuhu…and the minute, I grips the handle, compose myself, relax and let the force pull me up, suddenly I realized I was squatting on the water! Woots..and the wind was blowing through my face as I smiled to myself and the feeling was simply awesome..then I realized  from the corner of my eyes that Gary, was waving their hands up and down, I assumed they are asking me to rise up as  their voice being overshadowed by the speed boat. But the minute I wanted to rise up slowly, I lost my balance and woossshhhh…I fell…kekekekee…
And again 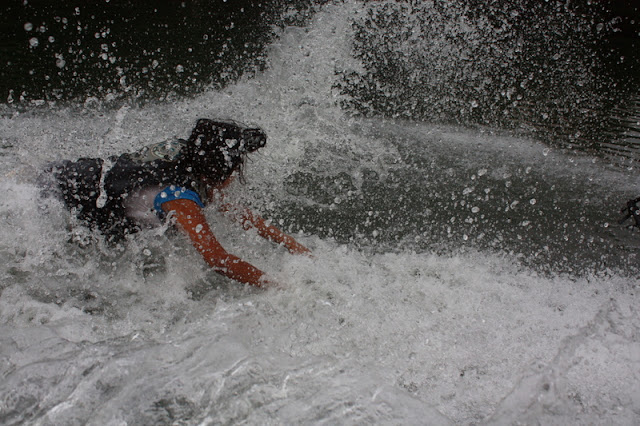 oh yes! it was even though i keep falling...hahaha. u should give it a try too