Last year, ive updated my status asking would anyone get pissed off if i said i hv the meet & greet passes to meet Justin Bieber?
So fast forward 15 months later, I finally had the chance to meet him in person. Honestly, I'm not a huge fan but I'm a believer and never say never for an opportunity so thanks to Digi Youth and Universal mUsic Malaysia..finally..i guess the law of attraction works ya?
Must admit it was a bit poorly organized, as the winners were asked to registered at 1.30pm when the actual meet & greet (MNG) is only going to be after 330pm. ???? Te MNG winners are not allowed inside the press conference hall. But I was lucky as I was heading towards KLCC, the security lead me to the press conference and nobody stopped me..LOL. So i went in and managed to grab a seat 3rd row from the front!
Waiting and keep waiting inside this hall...>.< It was nice to meet the nicest crew from Universal Music Malaysia like Michelle and Alycia. (met them before during Singapore trip to meet Far east movement) and i was a little surprised that Ryan Matjeraie from hitz/8tv quickie actually could recognized and say hi to me. Super friendly guy. Met him for the 1st time during the same Far east movement too..haha 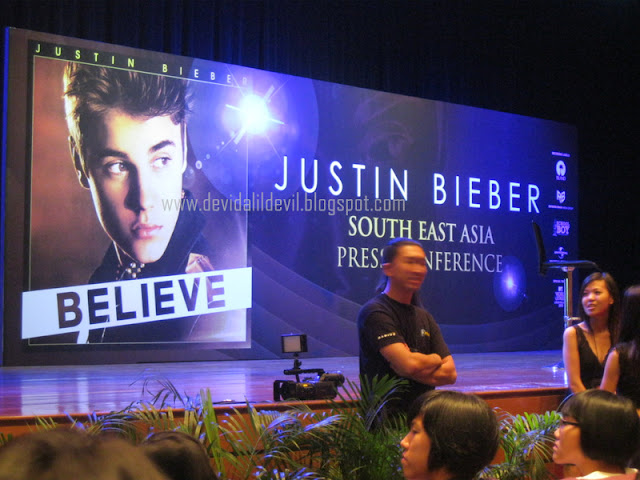 No recording are permitted during his  performance and it is strictly guarded so no choice..I've only brought my compact camera. my hp and samsung tab was surrendered at the registration counter earlier. Screaming fans started crying and 1 girl was lucky enough to be called on stage by Justin himself during 'One less lonely girl' acoustic. He was hugging her and kissed her forehead twice. She was hysterically out of control literally.


Finally after all that, ive managed to meet the rest of the MNG winners. wasnt shocked to know it was more than 7 of us from telco sponsors. 10 persons in a group photo.The house rules was "No autograph, no hugging, no kissing, no photo and no talking not even a hand shake". So as our turn came, it was a bit messy, I was literally being pushed at the corner..wth?? so after the group photo, the security and guard kinda drag us to move away, since i was at the corner and everyone has left, as I turned, Justin and I looked at each other eye to eye, he just came towards me and hugged..kekeke..mcm drama pulak kan? I must admit..he has the face of a pretty boy but a little too skinny. I think he did try to connect to the winners/fans as close as he can. But the only setback was the security and his bodyguard that are a little too exaggerating. So there..waited more than 3 hours for a 2 seconds meet and greet.
but at least Ive finally met this youtube sensation + multi-talented celebrity. haha never say never and believe in dreams..that's what i constantly reminding myself to do!