MEETING FAR EAST MOVEMENT & PARTY like a G6 at Singapore!!!

Aaaahhh....haaaaa....at last we finally managed to reach there on time and Singaporean are bunch of punctual lots, so the taxi are waiting to escort us to ..guess where....jeng jeng jeng...MARINA BAY SANDS hotel! All 8 winners from different channels like Zouk, Hitz Fm, Mjuice and UMM itself were delighted .

However, it was a little chaos in the beginning as time is definitely against us that day. But we could see that both Alycia & Michele were trying their level best to get us in for the M&G but the manager of FEM were pretty strict on the time management and that the duration of the interview from Malaysia media were also shorten to few minutes. So while waiting for our cue to be called, we went ‘window shopping’ . every corner are exclusive boutique and we couldn’t stop but to start compare them with our Malaysian Gardens, KLCC, Starhill and KLIA...haaaaa...

Ooo...finally the view of the iconic Marina Bay Sands ..i was so happy that it happens coz the initial plan was to either head to Wave House for the concert & if approved, the M&G session too.
We chilled at Fuse for a drink before were called to the Suite at level 53. Imagine the minute we stepped in to the Chairman Suite,...

Well...and it won't be complete for me without using their toilet before going back..LOL. hey how often does we get this kinda of chance, right? imagine paying $17,000 per night !!!! 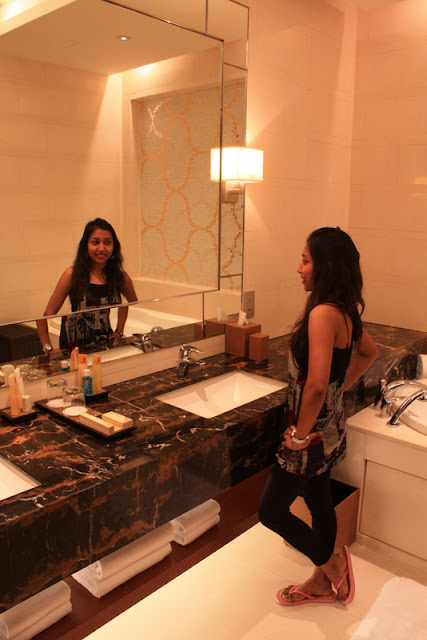 Anyway, we couldn’t managed to have the M&G session as they were running late to kick off their concert at Wave house, Sentosa Island...few steps from the place we are staying. Still , it was not a big disappointment..coz we still might hv the chance either before & after the concert for the M&G.


So, we took the transfer back to Siloso Beach and as the taxi arrived, we (B, Karen, Jun & I) were stunned. A Chrysler?  wow..yup..so cool eh? Upon arrival, Michele hand over the tickets and we entered Wave House.

Youngsters were everywhere with their bikini & shorts. Opening act was few upcoming Djs. And then finally, we were asked to be at the backstage...coz we are meeting FEM! at last..shook hands, say hi, photo with them and while i walked my way out, Dj Kev Nesh told me to party hard yeah..and i finished his sentence -- 'like a G6'while i showed the rock handsign followed by laughter from the group..that was memorable. :) :)
Then the rest of it, like a blizzard..PARTY..fuh..it has been years since my last open beach concert like this. it was crazy when FEM makes their appearance on stage..screaming voices everywhere..we were WIRED! with full bursting of wave at the back of the stage, every little souls out there was having fun like there was no tomorrow.

Then Rica of Hitz KK invited us to upstairs of WaveHouse and we dance like crazeee...heheeee thanks Rica. Vix of Hitz Kuching was there too. Party over and we were starving. Was searching for nearest food court but this is not Malaysia..all kitchens are closed. Thank God for 7Eleven. Bought noodle cup, drinks, bread and we sat by the bench at Song of the Sea merchandize store for some munching and chatting.

Btw, incase u were wondering where was Joshua, he was in the room with PSP, food and tv. :P

The next day, woke up early coz we want to chill by the nature-based swimming pool. Tucked in lush green with man made waterfall and the sound of the cicada penetrating the place seems like haven.

I would also love to take this opportunity to thank Universal Music Malaysia especially Michelle and Alycia for their great job and concern. It was nice meeting all the other winners as well from Karen, Tjun, Arri, Sarah, Heidy & Dreamie not forgetting Rica & Vix. The trip was short, but i'm sure it will last for long time in our mind..Singapore, we'll be missing you! ahaks!
Go figure by Devi da Lil' DeviL at Wednesday, March 23, 2011

Its all in one day? awww tats a long awsome day!