Woke up pretty early where i only have like 4 hours of sleep the night before. Ensure all my stuffs are properly placed as i dont want to miss out anything once im out of the house. I kept trying to re-fresh the Pantene's designated blog few times but its not activated yet still, so i just send to the technical team's email instead. Then about 840am, Nina, Ira and I car pool to Empire Hotel Subang. We need to be there by 10am. traffic pretty bad but once enter Federal Highway, it was smooth. not until we actually missed a TURN that change everything! Blaaahhh...so merry go round we went, ' ronda ronda' at Shah Alam and some of the places i totally dont have a clue where we are. Anyway at last we managed to make a BIG U turn and reach the destination almost 40 minutes late.. hate to be late but things like this is really unavoidable. Thank god it havent started yet when we reached there.
Empire Hotel Subang walkway lobby 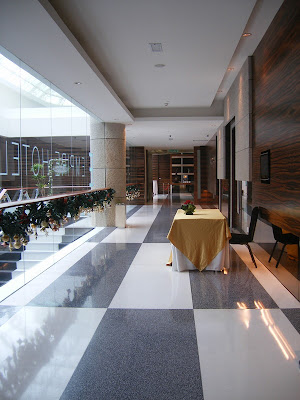 The rest are still sitting down waiting for the make up artists to arrive. So Reena (the PIC to handle this event) give us 30 minutes break to buy breakfast. We went to the shopping mall and well...Christmas is coming..much to my amazement of the decoration inside, but the statue kinda creepy at one point. but that doesnt mean we cant be freaky as well..:) 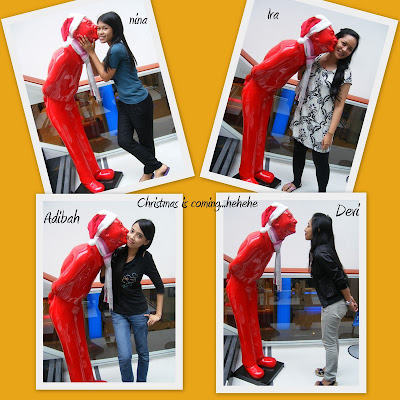 But as time goes by, the pressure and chaos starts to kick in. The dancers with their props, the make up artists with their MAC toolkit and the hairdresser with their gadgets are ready to rumble.
Our dresses for tonite 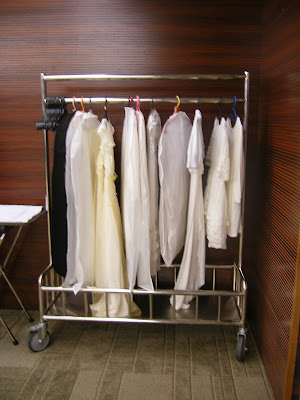 Hair and make up are done by Amber Chia Academy for all 14 finalists. Busy busy..waiting waiting. 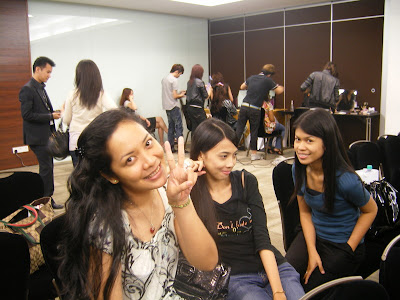 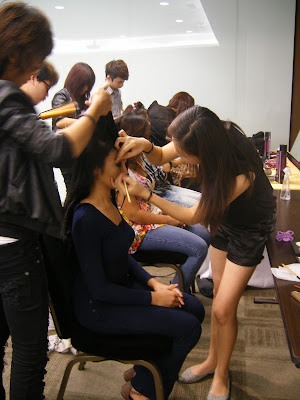 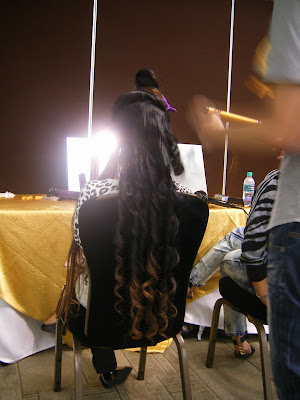 from 1230pm-320pm.then lunch approached. Fast food again...MCd..quick lunch at 330pm then off we were called to adjourn to the hall for our rehearsal. We were also given a Sachs ..like the beauty pageants. :P Funny thing was we only did our rehearsal ONCE and suddenly they said its about time to start the press conference. yea..it was like either we did it perfectly with 1 try or they just dont have any time for 2nd round. Local artiste started to come in one by one to the ballroom.
It was lisa suraini sitting in front of us 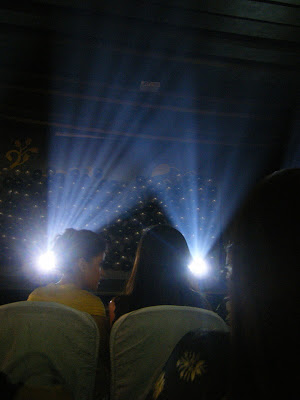 MC of the evening was En Ally ISkandar, announced the welcoming speech for Press conference of Anugerah Skrin 2010 (ASK 2010), balloons were released up, confetti were popped out and the dance show that welcomes us glamorously. 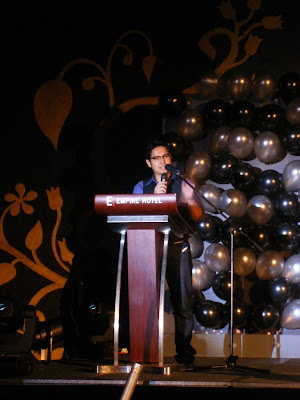 As the main key personnels from both tv3 & Pantene launched officially the ASK 2010, it was then all nominated drama were playing on the screen projection. 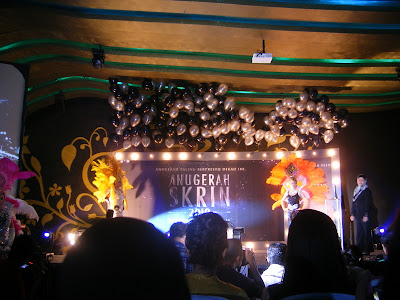 Then, 14 of us were introduced and as we did our catwalk to the stage, the photographers keep snapping away with their flash while we are trying our level best to fight the freaking coldness of the hall..muahaha..all went well..thank god. then they even release the video clip of us during our audition, photo and video shot. that was pretty weird....but i think they did pretty creatively on the editing part.
Guess who was sitting behind me?? One of Nur Kasih's main cast Fizz Fairuz
Probably one of the Malay drama that let every viewers to have wishful thinking.:) 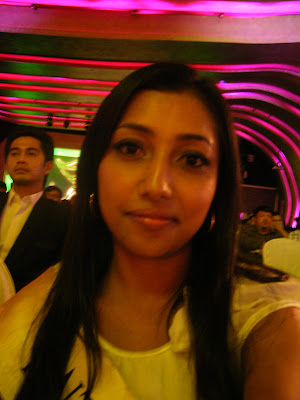 Lucky have the chance to snap a picture with the cute Lisa Suraini. 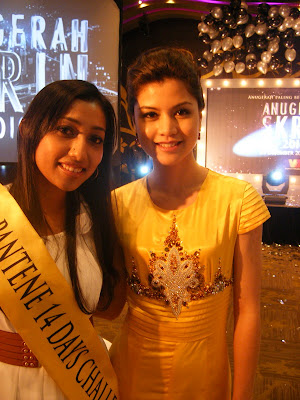 The backdrop..on christmas'eve..cant wait for it as i will be walking on a red carpet that night..wink 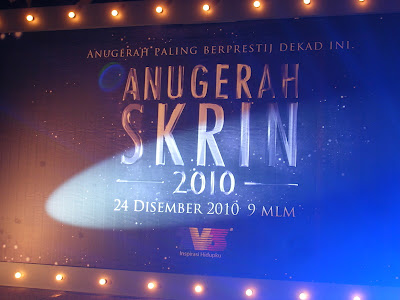 
Hehehe...remind me of the Miss Malaysia Indian that i participated 5 years ago. 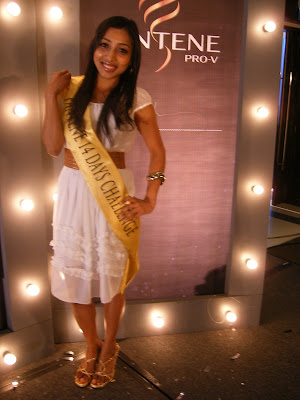 kinda happy that the dress turn out fine..the make up too. :P 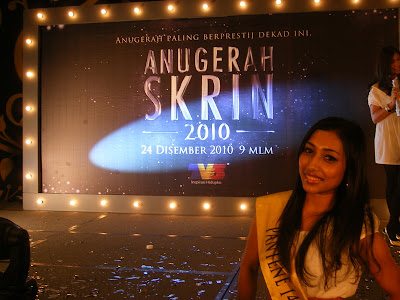 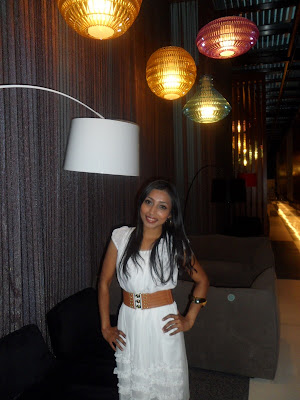 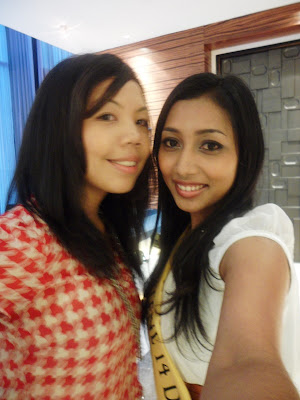 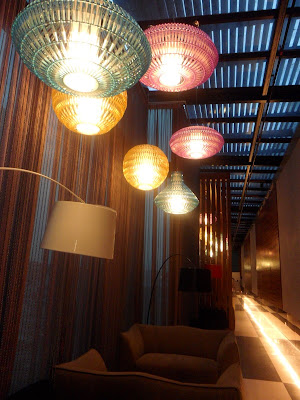 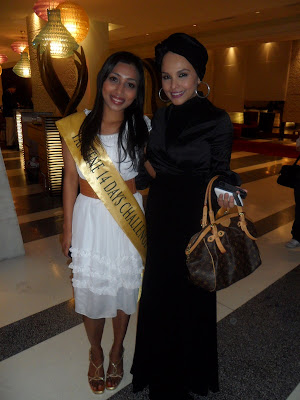 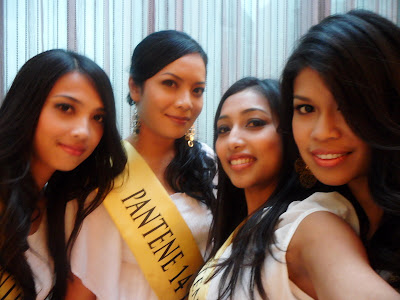 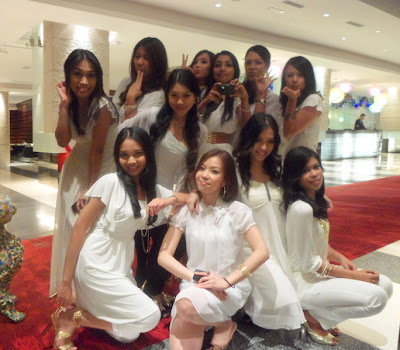 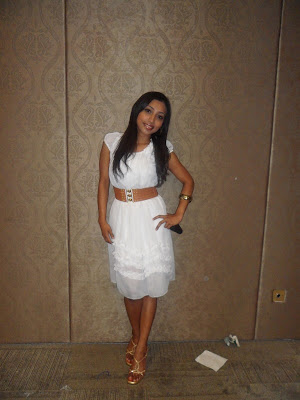 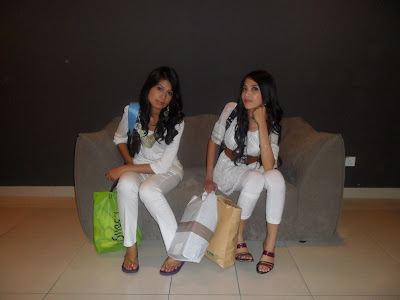 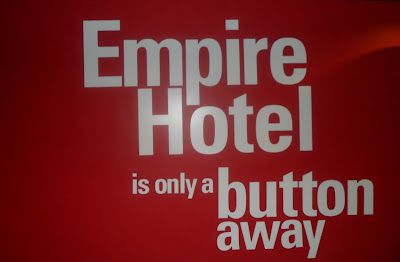 After the event was over, sense of relief is everywhere to be felt. We keep camwhoring..what else..and then Adibah,IRa, nina and I left the place at about 8pm. Cut the story short, a u-turn that change the fate of Nina's precious Viva tyre. burst..yup the tyre burst after escape from a close call of a drain. 4 girls all clad in white dresses, stranded at the back of Subang parade, and we are trying our level best to unscrew the nuts..its freaking so hard. we dont have any energy already. thank god, one pakcik on a taxi come and help us. hehehe..terima kasih pakcik. 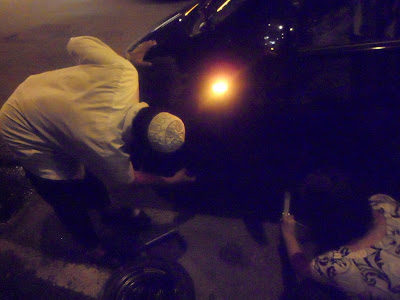 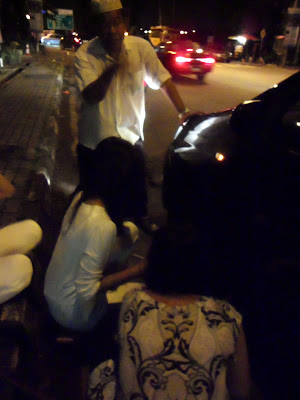 reach home almost 930pm. but slept only at 230am coz i have a lot of things to prepare for the pantene and other contests...zzzzzzzzzzzzzzzzzz
Go figure by Devi da Lil' DeviL at Friday, December 10, 2010